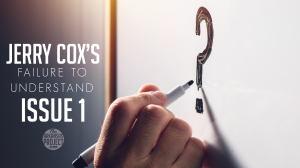 Do we have a duty to speak accurately about public policy issues?

That may be a strange question in this world, where we see politicians from across the spectrum shading the truth for partisan advantage. Maybe politicians don’t believe this, but you’d expect that those from the faith community would think so. That is why I am disappointed in Jerry Cox.

Yesterday’s blog post pointed out that some of the claims he is making about tort reform are simply factually wrong. I called him up to let him know about this. He seemed skeptical that I was telling the truth even when I presented him with facts showing him to be in error. He may not believe what he is saying to be wrong, but that appears to be because he is unfamiliar with how the civil justice system operates. But speaking out of ignorance can produce the same results of speaking with malice – false information is provided to the public.

That unfamiliarity with how the state’s courts operate is also present in Mr. Cox’s wider opinion on tort reform. During our conversation, Mr. Cox said, “There is responsible tort reform. I just happen to disagree with Issue 1 and its structure.” He then suggested that responsible tort reform could include ideas such as loser pays, safe harbor for doctors, structured settlement reform, and changes to class action lawsuits.

Many of those are good ideas. It would be great to see some of them enacted, or at least discussed, in the Arkansas legislature. In fact, legislators have attempted to enact tort reform in the past. But, as Dan Greenberg explained in a 2017 TAP post, the will of the people (as expressed by legislators) was frustrated by the judiciary:

That is why Issue 1 is so important – it restores the right of legislators to write procedural rules. If that happens, then the responsible tort reform that Mr. Cox supports could actually have a chance at being enacted.

It is indeed true that the legislative process can be messy. Anyone who reads the news must concede that legislators are flawed human beings and sometimes they make bad decisions. But is that really an argument against giving a supermajority of legislators some say over the state’s judicial rulemaking? Or, to put it another way, if Mr. Cox has such a dim view of legislators, then why does he support giving them power over any public policy issues? After all, the state legislature has wide power to make laws on nearly every subject. If the process is so flawed, if legislators are so untrustworthy, should they have the power to write tax law, set land use policy, or (to address issues close to Mr. Cox’s heart) make laws governing abortion?

If, under Mr. Cox’s views, a supermajority of legislators cannot be trusted to set judicial rules, then they can’t be trusted to write any laws. It does not make sense to think they are incapable of legislating in one small area concerning the judiciary when the people of Arkansas empower them to legislate in every other area.

Not only is Mr. Cox’s argument illogical when it is closely examined, it also means that his support of “reasonable tort reform” is hollow. As the history of tort reform in the state illustrates, nothing can be done in this area until the legislature’s power to make laws on this issue are restored. By opposing the constitutional change that would give legislators this power, Mr. Cox is opposing the only way that future tort reform can be enacted. In other words, he cannot say he supports “reasonable tort reform” at the same time he opposes the mechanism that would allow legislators to enact it.

I don’t think that Jerry Cox is lying when he says he supports reasonable tort reform. Instead, my view is that he fundamentally misunderstands the way tort reform will have to take place. From his meaningless objection that Issue 1 places a value on human life to his lack of knowledge about the state’s jury instructions to his failure to recognize why legislators cannot currently enact tort reform, he has shown that he is unfamiliar with the intricacies of this issue. Unfortunately, he is holding himself out as an expert on Issue 1. He is trying to convince others to oppose it, but he is using false or misleading information to do so.

Mr. Cox likes to use the Bible to campaign against Issue 1. I think that’s a misuse of the Bible, so I won’t do the same. However, his actions on Issue 1 remind me of a prayer I make every week at the Episcopal church I attend. We have a confession of sins where we say, “we confess we have sinned against thee…by what we have done, and by what we have left undone.” That covers both sins of commission (intentional acts to do wrong) and sins of omission (unintentional acts of doing wrong by failing to do the right thing). What Mr. Cox has left undone here is that he simply hasn’t bothered to understand the Arkansas civil justice system and how Issue 1 would affect it. Because he has failed to do his homework, he has ended up spreading falsehoods about Issue 1.

Mr. Cox is entitled to his opinion about Issue 1. But when he anoints himself an expert on tort reform, he has a duty to provide accurate information. (This is especially true for someone who comes from the faith community.) In that duty, he has failed.

Regrettably, Jerry Cox’s misrepresentations about Issue 1 are so extensive that I haven’t been able to cover them all in just two blog posts. I will have more to say about this matter later this week.