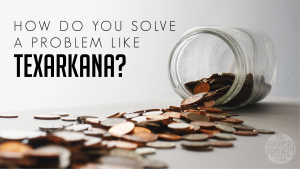 One exemption in Arkansas’s tax code is, in some circles, famous: the Texarkana exemption. The Texarkana exemption, established in 1977, lets residents of Texarkana avoid Arkansas’s income taxes. No other city enjoys this benefit. When legislators discussed the exemption at public hearings earlier this year, the kindest thing they had to say about their policymaking predecessors was that they must have been asleep at the wheel.
Were legislators asleep at the wheel in 1977? And is the Texarkana exemption justified today? I believe that the facts tell us a story that is not commonly appreciated – and, perhaps more importantly, the facts underscore the importance of establishing what is called “sunset review” for future tax reform.

THE ORIGINS OF THE TEXARKANA EXEMPTION

Texarkana is a city split by the border of Arkansas and Texas. No other Arkansas city is so divided. The Texas side of Texarkana today has 38,000 residents, while the Arkansas side has 30,000.
The income tax exemption for Texarkana was intended to keep the Arkansas side from losing residents. A 1977 Arkansas Gazette editorial alluded to claims that high-income Arkansas wage earners (such as, for example, physicians) were rumored to be moving to Texas — which did not, and does not, have a state income tax. (Nonetheless, that editorial called the proposed exemption “a whacky proposal that would create endless problems and inequities.”) Arkansas’s Texarkana delegation wanted to stop this migration; Rep. Earl Jones of Texarkana, therefore, proposed a tax benefit for the city’s residents.
Jones’s bill allowed Arkansas’s Texarkana residents to vote to increase the sales tax by 1% and to stop paying state income taxes. The Arkansas legislature — with public controversy, but with large voting majorities – passed it. To compensate for the income tax removal, Texarkana would have to increase its sales tax rate to 5%. The new Texarkana sales tax rate would match the Texas sales tax rate. Thus, both halves of Texarkana would have had the same sales tax and income tax rate in 1977.
The 1977 Texarkana tax benefit began as an almost revenue-neutral benefit to the state. The 1% increase in Arkansas sales tax would generate $980,000 a year for the state. The loss of state income tax was only $798,000. The sales tax increase would more than offset the loss of income taxes.
Today this Texarkana exemption costs Arkansas, even with the increased sales tax, a total of $16.6 million in lost revenue. (More precisely, this provision eliminates $21.2 million in income tax revenue but raises an additional $4.6 million in sales tax revenue.) The income tax revenue loss has far outpaced the sales tax revenue gain: the Arkansas income tax loss in no way pays for the increase in Texarkana sales taxes. Over time, the original benefit becomes a big revenue loss for the state of Arkansas.
The 1977 statute had originally made the two states’ sales taxes the same. In 2017, though, the Arkansas side now has a much higher sales tax rate. The Texas Texarkana sales tax rate is 8.25%, while Arkansas Texarkana features a 10.25% sales tax rate. The higher sales tax in Arkansas makes businesses reluctant to sell goods on the Arkansas side.
It isn’t fair to argue that Arkansas’s legislators weren’t paying attention to the costs and benefits of their 1977 proposal. They were paying attention: they weighted this statute as carefully as our current legislators.  The Texarkana exemption was originally an almost revenue-neutral tax exemption; if anything, it raised net state treasury income slightly. Both sets of Texarkanans would have had the same sales tax rate. But it’s also fair to argue that the class of 1977 did a poor job of predicting the future. The value of the exemption changed over time. Over the next four decades, the unusual circumstances of Texarkana became even more unusual – and much more costly.

THE TEXARKANA EXEMPTION DEMONSTRATES THE IMPORTANCE OF SUNSET REVIEW

Regular sunset reviews of the Texarkana tax benefit might have nipped this trend in the bud at the point when it was smaller and less costly. The Texarkana exemption made economic sense in 1977, but it’s nowhere near revenue neutrality in 2017.
The Texarkana exemption reveals the need for a systematic review of such incentives. Did the income tax exemption assist the city in keeping residents; did it help Arkansas overall, and at what cost? Policymakers should be required to examine tax exemptions regularly so as to explore such questions. Other states have reviews of tax incentive programs. The idea is that those tax incentives will be removed if the benefits outweigh the costs. For instance, Washington State began regular sunset reviews and as a result ended its $132 million a year R&D tax credit program in 2015. This program was not creating jobs for the state of Washington. This change wasn’t easy; aggressive lobbying from interest groups attempted to block it. But at the end of the day, Washington legislators could not justify the cost of the R&D tax credit program.
A May 2017 report from the Pew Charitable Trusts, “How States are Improving Tax Incentives for Jobs and Growth”, finds that “Arkansas is trailing other states because it has not adopted a plan for regular evaluation of tax incentives.” Pew suggests that Arkansas should build capacity for regular tax incentive review. For further reading, the Pew Charitable Trusts’ “Tax Incentive Programs” report of January 2015 explains more generally how public officials might best scrutinize these programs; furthermore, it contains many specific state examples.

One argument that has been made for preserving the Texarkana sales tax exemption is that businesses need stability in the state tax code. Regular changes to the tax code – so the argument goes – would disrupt long-term planning.
I think that argument fails. I believe that what businesses need is the knowledge that Arkansas policymakers will, in the long term, avoid handing out benefits to small, concentrated groups. Business investors need signals that tell them not to advocate for and rely on special privileges. Rather, they should be able to rely on a tax system that contains a broad base of taxation and low rates for everyone.
Regular review of all of Arkansas’s tax benefits would focus more scrutiny on those tax benefits that benefit few people, cost a lot of taxpayer money, and generate little or no positive spill-over effects for the public. If investors receive signals to the effect that they should understand narrow, special-interest tax exemptions as permanent, then Arkansas’s business climate will be harmed. The prospect of regular review protects Arkansas and its citizens from special interests who rely on the tax code for largely predatory purposes. In short, regular tax-benefit review would be a good thing for Arkansas.

HOW THE TEXARKANA EXEMPTION REALLY WORKS

The Texarkana income tax exemption benefits a small fraction of Arkansans: about 30,000 citizens. Let’s assume the benefit costs the Arkansas treasury $16.6 million a year. That means that, on average, each Texarkana resident receives about $550 a year in tax benefits. That’s a huge tax benefit for a relatively small number of people – and everyone else in Arkansas pays for it.
Whether or not the Texarkana income tax exemption generates any significant business benefits to the state and to the city of Texarkana is an open question. The advocates of the exemption bear the burden of demonstrating its value. But everyone should agree that regular review and legislative reporting of tax benefits like Texarkana’s would have kept this exemption from snowballing over the years into a difficult political problem. In 2017, about 30,000 people receive a huge benefit from the current exemption every year. That’s a concentrated and motivated political group, and it’s no surprise that their interests are aggressively represented in the legislature.
How could we unwind this exemption? The policy problem is simple, but the political problem is hard. The catalyst was that, 40 years ago, state legislators thought this was a revenue-neutral law. It’s not anymore. This underscores why the legislature needs to establish regular sunset reviews of such programs: future reviews could stop such programs – especially programs that change over time, as the Texarkana exemption did – from gaining political leverage.
To sum up: the policymakers who established the Texarkana exemption in 1977 were not asleep at the wheel. It is fair to accuse them of being imperfect predictors of the future, although that accusation is fair to make of anyone. The bottom line is that the tendency of government programs to become immortal – an example of what Milton Friedman called “the tyranny of the status quo” – demands an institutional response. It’s imperative to establish a formal process that forces regular review of such tax benefits. I recommended such a process in my recent book, How to Bring Tax Relief and Tax Reform to Arkansas, and I hope our legislature acts on this recommendation at its earliest opportunity.

One thought on “How Do You Solve A Problem Like Texarkana?”