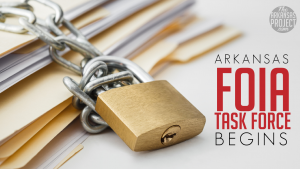 According to Act 923 of 2017, the task force must consist of nine members representing government, academia, and the media. The members will report their recommendations to the legislature before each regular session about proposed additions and exemptions to the state’s FOIA law.

Laurie Rushing told The Arkansas Project in an interview Wednesday afternoon that she sponsored the legislation “in order to protect the Freedom of Information [Act].”
Rushing said:

Rushing said the issue was a personal one for her — she said that she had to resort to the use of the FOIA to gather information about the circumstances surrounding the death of her daughter last year.

Without the FOIA and me as a parent being able to request information with the Freedom of Information Act, I wouldn’t have the information that I have on the death of my daughter…and some of the circumstances leading to her death. Even though we don’t have enough information for a criminal investigation, it does give us as a family peace of mind to know that we have a pretty good idea of what happened in the last hours of her life. That’s why it was important to me, because it did hit on a personal note.

Professor Rob Steinbuch of the Bowen Law School, a committee member and a friend of the Advance Arkansas Institute, added:

I was very pleased with the way the first meeting went; we elected a very capable chair; we discussed, among other things, how to ensure that the FOIA will be accessible to and useful for the public as we go forward.

The task force will meet on a quarterly basis.

Ellen Kreth, director of the Arkansas Press Association, was elected chair of the task force by a unanimous vote.

We hope the task force will be a new ally in preserving transparency in government in Arkansas.