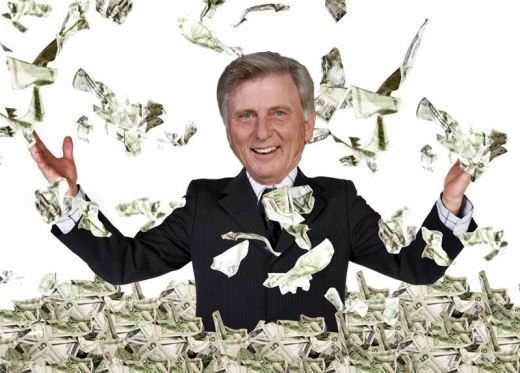 I wrote last week about Senator Alan Clark’s discovery that 49 state agency heads have received substantial raises — as much as $18,300 in some cases. Clark said he didn’t know who had authorized the raises. Now we know.

Liberal bloggers — for example, David Ramsey at the Arkansas Times — were quick to dismiss Clark’s discovery as a non-scandal because, according to their investigations, Clark had actually authorized the raises himself because he voted for several of the appropriations bills in the legislative session. Those liberal bloggers, however, are wrong.

If you keep digging into the numbers that Clark released, you’ll find something quite interesting: the directors in question were appropriated the same amount this year as they were last year (plus their 2% cost-of-living-adjustment that went to state employees). However, their take-home pay increased significantly this year, as we learned from Clark’s release. These directors, with a few exceptions, were also paid the same salaries in FY12 and FY13, despite being appropriated more funds each year. How can this be?

Tennille’s pay increase from FY13 to FY14 is roughly $18,300, despite the fact that he was only appropriated about $3,000 more (courtesy of the COLA) than he was the year before. Not bad for government work. (*For part of FY12, this position was occupied by former AEDC Director Maria Haley)

Let’s look also at ADC Director Ray Hobbs. Interestingly, Hobbs (like most of the 49 directors) was paid the exact same amount in the previous two years, despite being appropriated more each year than the previous year. It wasn’t until this year that Hobbs took the full amount he was appropriated:

Why didn’t department heads receive their full appropriated salaries in recent years? What Ramsey failed to point out in his article is that appropriation is different from authorization. An appropriation is a legislative function; an authorization is an executive function. The budget is calculated based on budget projections. The raises are inserted into legislation as part of the appropriation process. However, if the budget forecast is inaccurate and/or the funds end up being unavailable, the raises are not authorized by the executive branch — as we have seen in recent years. These are basic, yet critical, concepts of state government budgeting. I sure hope that Ramsey’s eagerness to criticize Senator Clark did not overshadow his attention to budget realities.

But now we know it was not Alan Clark who authorized the raises for state department heads — because he’s a member of the legislative branch, and he does not have that authority. So who did it?

The person responsible is Department of Finance & Administration Director Richard Weiss, according to a May 13th memo. In that memo, Weiss tells state employees:

There are two important facets to Weiss’s executive decision. The memo (1) raised the salary of state department heads across the board, by default. This wasn’t optional, according to this memo. Department heads were automatically given the raises. As evidence of that, Weiss’s memo (2) provided a way for department heads to opt-out of the raises if they chose to (“Appropriate paperwork is required to reduce the employee’s salary…”). Apparently, at least 49 department heads chose not to opt-out and accepted their massive raises. It seems that Weiss and the individual department heads share the blame.

The move by Weiss to institute the raises, I suspect, is what Senator Clark was looking for when he began asking who “authorized” the salary increases. Yes, the legislature appropriated the funds, but someone in the executive branch gave the go-ahead for the funds to be spent on these (very excessive) raises. We now know that that person was Richard Weiss — who, by the way, received a nice raise of $9,650 himself, compliments of his decree.

Weiss’s perspective on government spending seems a little more conservative these days than it was seven months ago. Earlier this week, Weiss announced that the state is revising its budget forecasts down after seeing slower growth than expected. Good thing all those bureaucrats already got those big raises, huh? This revision has to make you wonder how fiscally responsible and appropriate Weiss’s raises were for Beebe’s army of six-figure-salaried bureaucrats.

4 thoughts on “So, Who Authorized Those Fat Raises For State Department Heads?”