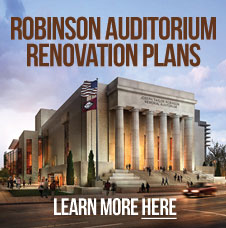 A few weeks back, I explored whether or not Little Rock employees are violating Act 312 by distributing materials that recommend the renovation of the Robinson Center (which is to be determined by a bond election in Little Rock next week; early voting is underway now). Under the newly implemented law, it’s illegal “to use any office or room furnished at public expense to distribute any letters, circulars, or other campaign materials unless such office or room is regularly used by members of the public for such purposes without regard to political affiliation.”

However, the law also says:

It is unlawful for a public servant or a governmental body to expend or permit the expenditure of public funds to support or oppose a ballot measure.

According to Gretchen Hall, CEO of the Little Rock Convention & Visitors Bureau, the brochures that are being distributed at the Robinson (view here) were paid for with public dollars (via the LRCVB) for a total cost of $1,032.51.

The total cost of the YouTube video is undetermined at this time. Hall said it was produced by an outside firm; the city has not yet received a billing invoice. When the city gets the bill, the balance will be paid for by LRCVB — with public funds. Hall said the production of the video was handled by one of LRCVB’s “contracted architects.” (I did not ask how much the architect is being paid.)

And finally, the cost of the fancy-schmancy luncheon was $1,037.55, paid for with public funds. Hall said there were no promotional materials distributed at that luncheon. However, she added that “the only item handed out was a small information card with a website address where the media could download the presentation.”

Here’s the card that was distributed. Oddly enough, it strongly resembles campaign material. Even more oddly: if you visit the web address that is listed, you’ll find the promotional web video, a brochure that touts the benefits of the renovations, and this handy FAQ sheet. If this isn’t campaign material, maybe it’s campaign material’s identical twin?

Hall explained that not all of the funds LRCVB receives are derived from taxes. I suspect there are funds generated by fees, ticket revenue, etc. However, Hall said all funds belonging to the LRCVB are considered to be public funds, and that seems to be the critical factor here: Act 312 defines “public funds” as “funds, moneys, receivables, grants, investments, instruments, real or personal property, or other assets, liabilities, equities, revenues, receipts, or disbursements belonging to, held by, or passed through a governmental body.” The use of these funds to support or oppose ballot measures is strictly prohibited, classified as a Class A misdemeanor. If convicted, a violator of Act 312 would be barred from any future public service.

I suppose no one knows for sure whether or not Act 312 is implicated by these materials — the law is new and has not yet been tested in court. Should these particular materials be brought before a judge, maybe the LRCVB’s defense would be,“Well, this stuff isn’t really campaign material, because for something to be campaign material, it has to instruct the reader to vote for or against something.” Perhaps that would be an acceptable defense. Until Act 312 is adjudicated, it will be difficult to predict its scope. However, these materials certainly seem to skirt the line and (at the very least) they don’t appear to be a proper use of public funds.

3 thoughts on “Who's Paying For Those Pro-Robinson Renovation Brochures?”