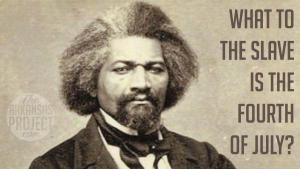 Frederick Douglass’s speech “What to the Slave Is the Fourth of July?” is one of the most profound meditations on the nature of America ever written. It is a speech that is wise, cruel, funny, and deep. It is a blazing attack on the immorality of slavery. But it also captures what it means to be an American — to participate in the continued advancement of civilization that inches ever closer to the justice for all that our nation’s Founders promised.

Douglas does not pretend that the Founders were angels. But he praises them “for the good they did and the principles they contended for.” The speech is a tribute to freedom and to the idea of America.
Read it (in its unabridged form) this Independence Day. You won’t be sorry.
Please follow and like us: