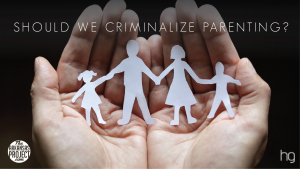 One beautiful day a few years ago, back when my son Robert was regularly playing soccer, my wife and I and our other two kids arrived at a midtown Little Rock soccer field to cheer him on. Shortly after the game, while we were talking to friends, my youngest child Rachel wandered off, as children will do in open fields. A few minutes later, a visibly angry woman approached us, holding my no-longer-missing child’s hand, and asked us “Is this your daughter?” Yes, we said. She responded, “Well, I’m a prosecutor. This is very dangerous. You have to keep track of your daughter at all times.” Despite the alleged danger of letting Rachel wander around the soccer field after the game, she seemed none the worse for wear. Nonetheless, to state the obvious, accusations of bad parenting carry a certain force when the accuser identifies herself as a prosecutor. I was too taken aback to do much of anything except to ask for the prosecutor’s name.

The next day I phoned the Pulaski County prosecutor’s office to ask if our accuser was actually a prosecutor. She was. I then described the incident to the office staffer and asked (and I wasn’t really joking, either) if we were in any kind of trouble. The response we got – which I have never quite been able to forget – was that, no, we weren’t in trouble, but that the accuser “feels very strongly about these issues.” Yes, apparently so.

I can live with a tongue-lashing from a prosecutor about what she saw as my bad parenting style. In America in 2017, parenting has become a spectator sport. And there are many upsides to vigorous public discussion about what makes for good parenting.  But it’s possible to go too far – especially when vigorous public discussion transforms into vigorous government activism that deems some traditional parenting practices to be unlawful. Across the country, parents are losing custody of their children and being thrown in jail – essentially because they are not monitoring their children 24 hours a day. I’m not exaggerating, either. Consider these anecdotes:

In large part, this problem is caused by aggressive enforcement of broad “parental neglect” statutes. Arkansas law emphasizes that parents must keep their kids safe – just as most or all parental neglect statutes do in other states. But if you look at the Arkansas statute that requires parents to keep an eye on their kids, you’ll see something that’s a little disquieting: namely, our rules about what constitutes a neglectful parent. More precisely, parents break the law, per Arkansas Code 12-18-103, if they leave their children alone:
(a) At an inappropriate age creating a dangerous situation or a situation that puts the child at risk of harm; or

(b) In inappropriate circumstances creating a dangerous situation or a situation that puts the child at risk of harm.

The following section of the code explains what constitutes inadequate parental supervision: this takes place when a parent puts a kid in

(a) Inappropriate circumstances creating a dangerous situation; or

(b) A situation that puts the child at risk of harm.

The alert reader will have noticed two flaws of drafting here. First, one might ask: what’s “inappropriate”? How do I know whether it’s “inappropriate” to let my 11-year-old play in the yard unsupervised? Does anyone really think that this kind of statute passes the basic rule-of-law test of providing anything like guidance to parents? Second – and somewhat relatedly – does anybody really think that I should be punished whenever I let my child do anything that puts him or her “at risk of harm”? In fact, just about anything that kids do puts them at some risk of harm. Doesn’t letting a child ride his or her bicycle around the block put the bicyclist “at risk of harm”? What if the child isn’t wearing sunscreen – does the infinitesimal risk of skin cancer from exposure to sunlight qualify as a “risk of harm?”
I would think that these are silly questions, except that (as demonstrated by the examples above) there is apparently a wave of prosecutors, cops, bureaucrats, and “child welfare advocates” who want to put those of us who are not helicopter parents in jail. Notably, journalist Lenore Skenazy has created a blog that chronicles the regularly-occurring miscarriages of justice that are produced by a safety-at-all-costs mentality.

Her wonderful book, Free-Range Kids, is packed with examples of this troubling cultural trend – such as the parenting magazine which advises those who bring their kids to other people’s homes to bring along some extra shoelaces – so as to tie shut cabinets that might otherwise be opened. (Although I appreciate that a guest who ties cabinets shut may make things slightly more safe for kids, I would suggest that this is likely outweighed by the chance that such behavior will convince the average host that the shoelace-wielder is insane.)
Everyone is in favor of safety, of course, but when parents run into legal trouble in the 21st century for letting their kids explore the world in a way that would have been perfectly uncontroversial in the 20th century, something has gone terribly wrong. Earlier this year, state Senator Alan Clark tried to solve this problem with what I would call a “parents’ rights” bill. Essentially, the bill carved out an exception to the existing parental neglect statute, saying: here is a list of behaviors that isn’t parental neglect. Letting your kids walk to school or to a friend’s house, letting your kids play outside, letting your kids stay inside a car briefly while the driver pops into a store, letting your kids stay at home even though you’re out – all of these are perfectly OK, not crimes, if one important condition is satisfied: as long as the child has the capacity to avoid both immediate danger and a significant risk of harm.

Sen. Clark’s parents’-rights bill passed through the state Senate by a large majority, but it foundered in the House Judiciary Committee on March 28 after it was the subject of some very strange criticisms. I will write about that committee hearing tomorrow. It’s recorded and archived, and you can watch the whole thing at arkansashouse.org – for now, let’s just say that watching that hearing won’t exactly burnish your faith in representative democracy.

One thought on “Should we criminalize parenting?”