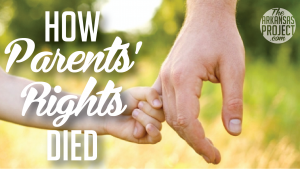 As I discussed in my post yesterday, earlier this year state Senator Alan Clark tried to address a significant problem by writing a “parents’ rights” bill. The central problem is that, under current law, the definition of “parental neglect” seems to be so broad as to be essentially meaningless. To put it another way, when you have a parental neglect law that says, essentially, don’t do anything inappropriately dangerous, this is too broad and too vague. Among other things, broad directives like that give state government too much power to interfere with child custody and deem normal, traditional, and desirable parenting practices to be evidence of neglect. Clark’s bill would have carved out an exception to the existing parental neglect statute, saying: here is a list of behaviors that isn’t parental neglect. Letting your kids walk to school or to a friend’s house, letting your kids play outside, letting your kids stay inside a car briefly while the driver pops into a store, letting your kids stay at home even though you’re out – all of these are perfectly OK (that is, not punishable by law), if one important condition is satisfied: as long as the child has the capacity to avoid both immediate danger and a significant risk of harm. Here’s the bill.
I think most people would find this policy uncontroversial, so I was pleased – but not surprised – to see the bill pass through the state Senate with 75% approval. I was more surprised, a few days later, to see the bill founder in House committee. You can read Lenore Skenazy’s and Caleb Taylor’s summaries of what happened; what follows is a less condensed version.
Senator Clark first presented SB 305 by explaining its purpose:

“This is a bill to make sure that my parents would not be criminals … as a young teenager, I used to ride miles and miles on my bicycle and be gone for hours at a time … my sister and I would be left in the car … and we would aggravate and fight with each other until they came back, not having any idea that they were criminals.”

Some legislators’ questions that followed Sen. Clark’s presentation struck me as exceedingly strange. Rep. Doug House asked several questions that seemed to be intended to demonstrate that some parts of Little Rock are more hazardous than others – and, although this is obviously true, I admit that I didn’t (and don’t) see the relevance of this point.
House Speaker Jeremy Gillam then put forward a series of questions that I thought triggered the most remarkable exchange of the hearing, asking Senator Clark why he was complaining about the necessity of taking kids out of an automobile and inside a store. “I’ve raised two boys, my wife and I have, and the grocery store didn’t stop me from taking them inside, and I’m trying to figure out why that’s a problem,” Gillam said.
Senator Clark responded, essentially, that parents have enough real problems to worry about without having to bear an unnecessary duty to take their kids out of the car every time the parent steps out of it; I then mentioned the anecdote I discussed in yesterday’s post about the six-month-pregnant mom in Kentucky who made the mistake of leaving her kids in an air-conditioned car for 4 minutes, which led to unwelcome police interest and culminated in the mom’s spending the night in jail.
The Speaker responded:

“I’m just curious if you happen to be up on the latest statistics on how long it takes to carjack someone’s vehicle – how many seconds it takes a criminal to take a vehicle – because I think that the crux of a lot of this – from my understanding of the meetings I’ve had with a lot of folks in regard to this – some of the investigations have been stemmed from complaints because of the fear of kidnapping – and it’s not that they think that they’re necessarily bad, that motivation – that’s why I never left my kids in a vehicle and ran into Walmart, or anywhere else – because I didn’t want someone to take my kids in a carjacking – and so, it’s a lot less than four minutes – it’s about 37 seconds.”

Senator Clark replied that he used to have an irrational fear of driving over bridges – that, in the past, he had feared that he might accidentally drive off of a bridge – but that, nonetheless, he had managed to drive over plenty of bridges without suffering any harm. In retrospect, I realize that this was a nice way of pointing out that it’s possible to worry about things too much – especially if they’re too unlikely to be worth worrying about.
But Speaker Gillam persisted:

“From the conversations earlier, it was just kind of like “Well, nothing could ever go wrong with leaving a kid in a car,” and I was just pointing out that there were plenty of criminological arguments that would dictate otherwise.”

I replied: “I would just say, Mr. Speaker, if we’re really going to have this view that kids being kidnapped has this kind of weight, we really shouldn’t be letting children walk home from school or walk home from the park, ever, right? – if that really has weight, this kidnapping fear.”
Rep. Charlene Fite asked several questions that suggested that she thought the structure or function of the bill was inherently flawed. “It’s very difficult to explain what neglect is not, and that seems to be the intent here, to explain what intent is not,” she observed. She then added that instances of child neglect “would almost have to be decided on a case by case basis – where this happens, what the situation is, the time of day – so therefore I am having a problem with our putting this into law, when it would have to be on a case by case basis anyway.”
I briefly answered that, no matter what the ground rules are, people would make case-by-case decisions anyway – and that Clark’s bill was just a way to give more appropriate weight to each factor in the case. Representative Sarah Capp, who perhaps was unimpressed by the clumsiness of my answer, then provided a much clearer response to Rep. Fites’s question:

“What I am zeroing in on, and what is relevant to me, is that [the definition of “neglect” in SB 305] specifically states that any of the following actions, unsupervised, are regarding if the child has a sufficient capacity. So, correct me if I’m wrong, it seems to me that individual circumstances are going to be weighed, and it is going to be on a case by case basis. Because that investigator … or judge is going to be weighing whether that child is old enough and has sufficient capacity to be left unsupervised. Is that correct?”

I was (and am) grateful for Rep. Capp, who to my way of thinking demonstrated with this answer that she understood the way the bill would have worked better than anyone else in the room.
Lori Kumpuris from the prosecutor coordinator’s office explained that her organization was neutral on the bill, and then proceeded to criticize it:

“Our prosecuting attorneys association is neutral on this bill, however we do have some concerns. Many of them you all have raised with your questions. Particularly we are concerned about the section beginning on page 2 where it talks about it’s not a crime. In section 3 it says, “non-criminal acts: an act of a parent, guardian, custodian, or foster parent described in the following section is not a criminal offense,” and then it goes into Section 4 and it outlines all of the different provisions that are not criminal. You all have raised the questions the concerns that we have as prosecutors. Any time there is a crime you have basically the person’s intent is committing the crime, you have various attendant circumstances, and a result that occurs. And by adding one or two specific facts to each of the situations listed there in Section 4, there are situations that could arise that could become criminal and we are concerned about the impact this might have on prosecutors’ discretion in these types of cases. We just wanted to raise that issue before the committee.”

As Caleb Taylor noted in his summary of the hearing, it is hard to understand Kumpuris’s statement as suggesting anything other than that some prosecutors really do want to preserve the power to prosecute parents for letting their kids walk home unaccompanied from a park or a school.
Kumpuris’s statement was a crucial blow to the bill. The ‘nos’ drowned out the ‘yeses’, and thus the committee rejected the bill.
Immediately after the bill was heard, Senator Clark told me that some “child welfare” organizations had sent out a statement opposing the bill. After I got a copy of that statement, it became apparent that the arguments it contained had swayed some of the legislators in the room. In particular, it appears that either or both CASA (Court Appointed Special Advocates) personnel or Arkansas attorney ad litem personnel misrepresented the law at issue, and that their misrepresentation succeeded in misinforming several legislators (including, for instance, Rep. Charlene Fite). I talked to some of the principals of these organizations, and I’ll write about that conversation later this week.