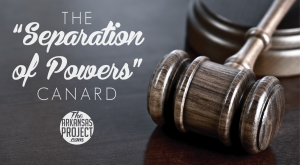 While researching tort reform issues, I came across an editorial in the Texarkana Gazette discussing the issue. It does not delve into the merits of reform, but mainly points out that business is in favor of reform while lawyers are fighting against it. Generally, an editorial like this would go unmentioned on this blog. However, there are a couple of lines in it that suggest there is still some misunderstanding about what SJR 8, the tort reform amendment, would actually do. That misunderstanding involves the separation of powers between the legislature and the judiciary.

According to the Gazette’s editors, “Lawmakers could not stop themselves from adding a provision [to SJR 8] that basically gives the Legislature ultimate control over the state judicial branch. That’s a separation of powers issue. We don’t see that surviving no matter what.”
I’d urge these editors to read a blog post from August by Dan Greenberg that spells out just how wrong this notion is. It is quite detailed, but here are some relevant excerpts to catch the Gazette’s editors (and any other readers) up to speed on what separation of powers means:

Speaking generally, the legislative branch is supposed to create general policies, while the judicial branch is supposed to decide particular, concrete cases. This neat division of authority between the legislative branch and the judicial branch sometimes breaks down when we look at the rules of the legal process. Even though the rules of the legal process are unquestionably meant to apply generally (just like any other set of laws or regulations), some courts have attempted to put those rules under the sole control of the judicial branch. This is most defensible when the rules in question have to do with the internal business of the courts; it is least defensible when the rules in question affect the substantive rights of the people.

There are plenty of good policy arguments in favor of tort reform. We’ve made a bunch of them here. Perhaps because these arguments are so persuasive, reform opponents must resort to making tenuous constitutional questions to derail this amendment. These arguments don’t stand up to scrutiny, however.

This raises the question of whether tort reform opponents can win on the merits of the argument. One telling comment in the Gazette’s editorial is this: “Business will likely go straight for the voters while the legal community will probably look for ways to get the proposal tossed from the ballot.” Trying to deny voters the chance to decide on this proposal (or trying to raise bogus constitutional questions) indicates to me that tort reform opponents know that the people of Arkansas are not buying their arguments against SJR 8.