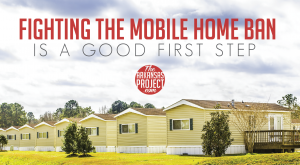 It seems that some people just don’t like mobile homes. That must be the explanation as to why politicians in McCrory decided to ban any mobile homes that had a value of less than $7,500. (McCrory is in Woodruff County, just north of Brinkley on I-40.) The politicians quickly backed away once a city resident sued, but that wasn’t good enough for a federal judge. The city recently settled with the mobile home-owning couple for $20,000.

This ban is a blatant attempt to prohibit affordable housing. That runs counter to federal law banning wealth-based discrimination, and the city deserved all the legal trouble it brought upon itself. But McCrory isn’t the only town that makes efforts to keep out the types of people who cannot afford higher-priced housing. These officials are just really bad at crafting laws to do this.

Land use regulations, from zoning rules to smart growth policies to minimum lot size mandates, all drive up the cost of land. This, of course, hurts low-income people the most. A 2015 study from the Mercatus Center at George Mason University concluded:

Because land-use regulations tend to limit housing supply and drive up the price of housing, current homeowners tend to benefit while renters and new homeowners are harmed. This burden falls disproportionately on poor households, which spend a larger percentage of their income on housing than wealthier households, and which are more likely to rent than to own.

These effects are most pronounced in some of the most productive cities in the United States, where the high cost of housing has kept population growth relatively low despite the greater economic opportunities afforded by these cities.

Even the Obama Administration recognized this problem. Jason Furman, President Obama’s chairman of the Council of Economic Advisors, had this to say in a 2015 speech:

Zoning and other land use regulations, by restricting the supply of housing and so increasing its cost, may make it difficult for individuals to move to areas with better-paying jobs and higher-quality schools. Barriers to geographic mobility reduce the productive use of our resources and entrench economic inequality.

An outright ban on affordable housing, as McCrory tried, obviously runs afoul of the law. But zoning and other land use restrictions are perfectly legal. Those who cheer for the mobile home owners in McCrory should consider whether or not these other legally-sanctioned land use restrictions are also as bad. Driving up land and home prices has considerable economic consequences. These consequences are especially harsh for low-income Americans.

Maybe this hits a little too close to home (pardon the expression) for me. You see, I grew up in a trailer (we didn’t call them mobile homes back then). It was a double wide, so our family was kind of fancy for the area, but it was a mobile home nonetheless (although there was nothing really mobile about it – it has stayed in the same place for more than forty years). Although my wife grew up in mobile home-free Brooklyn, she points out that city people have apartments and country people have mobile homes. She’s right – mobile homes are smaller, more affordable housing for rural and small-town people who don’t have a lot of income.

The government should not be banning mobile homes. But government officials should also take a close look at other policies that are artificially raising the price of land and homes. These policies may not be as blatant as a mobile home ban, but they have much worse economic effects throughout the country.