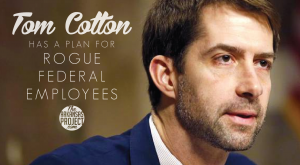 Senator Tom Cotton is offering some advice to President Trump in dealing with the dispute over who heads the Consumer Financial Protection Bureau (CFPB).

Richard Cordray, the former director of the bureau, stepped down last week. His newly-appointed deputy director, Leandra English, assumed duties as acting director, encouraged by Democratic Senators Chuck Schumer and Elizabeth Warren. President Trump contends that he has the power to appoint an acting director. He named Mick Mulvaney to that post. Now the agency has two people attempting to exercise authority over the bureau.

So what should be done? Here’s what Sen. Cotton says:

The Consumer Financial Protection Bureau is a rogue, unconstitutional agency. Leandra English’s lawsuit to install herself as acting director against the president’s explicit direction is just the latest lawless action by the CFPB.

The president should fire her immediately and anyone who disobeys Director Mulvaney’s orders should also be fired summarily. The Constitution and the law must prevail against the supposed resistance.

This is obviously heated rhetoric, but Senator Cotton is onto something.

First, take the issue of who should lead this bureau. The Dodd-Frank Act specifies that the deputy director takes over when the director is absent or unavailable. But there is another federal statute, the Federal Vacancies Reform Act, that says the president has the power to appoint an acting director. Some are quibbling with the exact language of the Dodd-Frank Act, trying to say that a resignation is the same thing as the director being absent or unavailable. That is not something that the general counsel for the CFPB buys. The opinion of that lawyer, which should carry some weight with Leandra English (a CFPB employee), is that the president should appoint the acting director.

This plays into the larger constitutional questions raised by Sen. Cotton. The editors of National Review explain this issue more fully:

The CFPB’s leadership structure, which already has been found unconstitutional by a panel of the Court of Appeals for the District of Columbia, is designed to create a separate power within the federal government, one that is answerable neither to the president, who in the ordinary course of affairs has the power to dismiss and replace officers of executive agencies, nor to Congress — and which is hence outside of ordinary democratic oversight. That is a recipe for abuse, and that abuse is not hypothetical: The bureau already has been obliged to reverse itself when Cordray, with no legal authority, unilaterally increased the fine in a mortgage-insurance case from $6 million to $103 million.

As Sen. Cotton points out, this boils down to following the Constitution. The president, by statutory and constitutional authority, has the power to name the CFPB’s acting director. The agency itself needs to be reformed to deal with the serious constitutional problems that it poses. It’s unclear if Mick Mulvaney, once he takes his place as the undisputed head of the agency, will follow Sen. Cotton’s advice and fire anyone who disobeyed his orders in the interim. The employees of the CFPB, however, should be wary of following the lead of Senators Schumer and Warren on this. These senators are looking to make political points here. CFPB employees should be concerned about following the law and the Constitution.

One thought on “Cotton Has a Plan for Rogue Federal Employees”