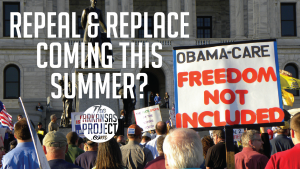 Legislation to repeal and replace Obamacare could pass the Senate by the end of summer, according to Sen.

A spokesman for Sen.

John Boozman told The Arkansas Project in a phone interview Monday afternoon that the August recess was “the target to try to get it done.”
Boozman wants legislation that controls costs, covers “people with pre-existing conditions,” and isn’t a “one-size-fits-all approach.”
Patrick Creamer, a spokesman for Boozman, said:

We’re trying to move forward in finding an agreement. His view is if it takes a little time that’s fine as long as it gets done right. It’s something they’re focused on every day. It’s just a matter of finding a path forward that a majority of the folks in the caucus can support.

In terms of what he wants to ensure that the bill does…one of the biggest frustrations we’ve heard from people is that Obamacare didn’t do anything to control costs. The replacement has to make sure it’s actually driving up costs instead of driving them up. It seems like a week doesn’t go by where you hear reports of premiums going up. It’s just not sustainable. He wants to make sure that the replacement does have policies in it that contains costs. One of the other things is that he wants to make sure of too is that with Obamacare you were able to provide coverage for people that didn’t necessarily have it before. For that small subset of the population, you’ve uprooted the healthcare of millions of other Arkansans and Americans relied on. He wants to make sure that whatever replaces it doesn’t have that sort of negative affect again. He does want to ensure that people with pre-existing conditions are covered.

I do think there is a real commitment to getting it done. The House sent over what they could and now it’s up to us to take that and make it into something that could pass here and can be agreeable between the (House and Senate).

He’s been talking with the Governor’s Office. The one-size-fits-all approach of the current law has caused a lot of problems for folks.

House Republicans narrowly passed legislation repealing and replacing Obamacare in early May, but the Senate hasn’t put the bill up for a vote yet. All four members of Arkansas’s delegation in the House voted for the legislation.

Tom Cotton told Talk Business last week that he wanted Arkansas to have “a lot more flexibility and discretion” to reform its Medicaid expansion at the state level. Under the Obama administration, such flexibility was non-existent when Gov. Mike Beebe and the Republican-controlled state legislature created the program in 2013.

I think in the long run, Medicaid should be transformed into a system where our governors and legislators have a lot more flexibility and discretion to design the system that works for our states. You know, Arkansas is a very different state from California or Oregon. Our governor and our legislature should be able to design a healthcare system that works for our population.

Just a couple weeks ago, they had a special session that moved about 60,000 people off of the Medicaid rolls and into private insurance. We’d like to give them more flexibility and more discretion to, say, have small co-payment requirements or adjust income levels to reflect economic and healthcare realities in Arkansas. We’d also like to make sure that other states that spend way more than we do on Medicaid are not continuing to be a drain on taxpayer dollars from Arkansas. Ultimately, our goal should be to get most able-bodied adults off of Medicaid and into a job, or into the individual market, so Medicaid can continue to provide the role that it did before Obamacare, which is supporting the elderly, and the disabled, and the severely poor.

It’s becoming clearer that Obamacare is destined to implode on itself absent any reform by Congress. For example, Blue Cross and Blue Shield dropped out of the individual health insurance market in Nebraska last week. Rate increase requests for health insurance companies operating in the Arkansas individual market are due next month.

One thought on “Senate Obamacare Repeal-And-Replace Bill Coming This Summer?”