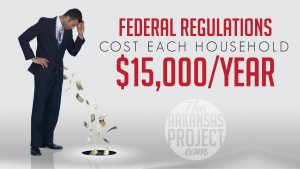 President Obama spent his last year in office continuing to bury the country in red tape, but there might be a reprieve in sight.
According to a study released this week by the Competitive Enterprise Institute (CEI), the Federal Register contained 95,894 pages, the highest level in its history — and 19 percent higher than the previous year’s 80,260 pages.

The Federal Register is the federal government’s official journal of regulations, proposed regulations, and notices.

President Obama implemented 685 “major” rules during his term, compared to Bush’s 505 “major” rules. A major rule is a rule that affects the American economy by $100 million or more.

This year’s report offers an important benchmark that will allow us to measure President Trump’s commitment to cutting red tape against his predecessors. If you compare President Trump’s first four months to the same period under President Obama in 2016, Obama issued 1,164 rules, while the Trump administration issued 897 rules. That’s a 23 percent decrease. More importantly, if you look at ‘significant’ rules that have an estimated impact of $100 million or more, Trump’s agencies have issued 78 percent fewer costly rules during that same period.

Crews estimates the cost of all these federal regulations to be $1.9 trillion last year, or about $15,000 per household. He recommends that state legislatures pass a “Regulation Freedom Amendment” to protect their citizens from the costs of federal over regulation.

Whenever one quarter of the members of the U.S. House or the U.S. Senate transmit to the president their written declaration of opposition to a proposed federal regulation, it shall require a majority vote of the House and Senate to adopt that regulation.

Resolutions calling for such an amendment were introduced in the 2015 and 2017 legislative sessions in Arkansas, but never garnered enough support for passage.

You can read the full report here.