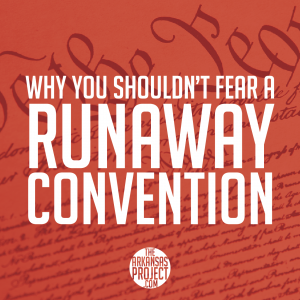 One of the main fears expressed by opponents of an Article V convention is the perceived danger of a “runaway convention” — a convention in which delegates support changes to the Constitution that go beyond the mission that the delegates were originally given.
It turns out that Supreme Court Justice Antonin Scalia addressed this concern (and others) way back in 1979.
From Compact For America:

The usual suspects who are opposed to organizing an Article V convention claim Justice Antonin Scalia supports their position. Like so many of the claims underpinning their opposition to an Article V convention, this claim is not true. Justice Scalia is very clearly on record as supporting an Article V convention limited to a specific issue or amendment. He only opposes a wide open Article V convention.
Here is the proof: a partial transcript from the American Enterprise Institute Forum held on May 23, 1979 entitled “A Constitutional Convention: How Well Would it Work?.” Panelists included Paul Bator, Walter Berns, Gerald Gunther and Antonin Scalia.  Grover Norquist was in the audience and participated in the questioning.
In response to a question about whether an Article V convention can be limited, then-law professor Scalia said:
There is no reason not to interpret it to allow a limited call, if that is what the states desire.
In response to a question about what good might an Article V convention produce, Professor Scalia gave the following answer:
I have not proposed an open convention.  Nobody in his right mind would propose it in preference to a convention limited to those provision he wants changed.  Regardless of the issue – say, a constitutional amendment on abortion – its supporters would want a convention that considers that issue and nothing else; or one that considers only the particular features of the Constitution that they do not like, but precludes consideration of those features they do like.  I think there is nobody, except maybe one or two anarchists , who would sincerely want an open convention for its own sake, to expose the whole system to possible change.
In response to a question from the audience asking what type of amendment requires the extraordinary remedy of state-initiated Article V change, Professor Scalia gave the following response:
I listed first among the thing that I would like to have considered the structural issues at the federal level.  I do not have a lack of trust in the American people.  I am the one here who is least terrified of a convention.

This is big news, because you’d be hard-pressed to find someone more educated on the ins and outs of the Constitution than Scalia.
Hopefully, legislators will take Scalia’s advice and pass some of the Article V bills currently stalled in the legislature: we reported on one embarrassing failure to move ahead yesterday.
You can read the rest of Scalia’s thoughts over at Compact For America here.

3 thoughts on “Scalia: Article V Conventions Can Be Limited”