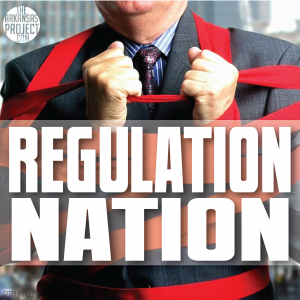 Arkansas legislators whiffed on an opportunity to roll back burdensome federal regulations Monday.
Legislators failed to pass state Rep. Grant Hodges’ HR 1031, a bill that would have urged Congress to pass a Regulation Freedom Amendment, out of the House State Agencies Committee yesterday.
The bill says:

WHEREAS, people throughout the country are concerned by the expansion of federal regulation which can endanger economic growth and the creation of jobs; and WHEREAS, polling shows that almost two-thirds (2/3) of American voters agree that federal regulators should be more accountable to elected officials; and WHEREAS, under Article V of the Constitution of the United States, amendments to the federal Constitution may be proposed by the United States Congress whenever two-thirds (2/3) of both houses deem it necessary, or upon the application of the legislatures of two-thirds (2/3) of the several states the United States Congress shall call a convention for the purpose of proposing amendments; and
WHEREAS, the House of Representatives, along with legislators in multiple states, urge the United States Congress to propose the Regulation Freedom Amendment in order to stop an increasingly abusive federal regulatory regime of bureaucrats in Washington that prevent the economic growth of our country…
WHEREAS, the text of the Regulation Freedom Amendment reads, “Whenever one quarter of the Members of the U.S. House or the U.S. Senate transmit to the President their written declaration of opposition to a proposed federal regulation, it shall require a majority vote of the House and Senate to adopt that regulation.”, NOW THEREFORE, BE IT RESOLVED BY THE HOUSE OF REPRESENTATIVES OF THE NINETIETH GENERAL ASSEMBLY OF THE STATE OF ARKANSAS: THAT the House of Representatives urges the United States Congress to propose the Regulation Freedom Amendment.

At worst, not enough states would pass similar resolutions, no Convention would be called, and this bill would do nothing besides send a message to Congress that Arkansans are being hurt by top-down, unreasonably burdensome regulations from Washington, D.C.
However, if enough states did pass similar resolutions, leading to the passage of a Regulation Freedom Amendment by Congress, this bill would be a meaningful check on the out-of-control regulatory status quo of the federal government.
For instance, if the Regulation Freedom Amendment existed presently, Arkansans likely wouldn’t be facing a new round of Environmental Protection Agency regulations that will hike average citizens’ utility bills and result in massive amounts of job losses.
Under this amendment, federal bureaucrats would no longer be able to pass massive, complicated regulations on the American people without Congressional approval.
Hodges said at the committee meeting yesterday:

I think really if you look at the Amendment that we passed last November to give the state legislature control over our regulations. I think this is even a toned down version of what they did; so really I don’t think it’s too radical of a suggestion because this legislature now has full control over all regulations proposed in state government and this would at least require a quarter of either the House or the Senate to even vote on a regulation. I think it’s a common-sense approach. I think it could be a successful model. It’s been supported by the National Farm Bureau.

But the bill, unfortunately, came up short on votes yesterday: even two Republicans, state Reps. Prissy Hickerson and Kelley Linck, were among the “no” votes. You’d think attempting to roll back federal regulations off of average Arkansans would be a worthwhile undertaking for members of a political party that regularly campaign on fighting back against the federal government and making it easier for government to create jobs.
I contacted both Hickerson and Linck asking their rationale behind voting against the bill, but they never got back to me.
All friends of limited government in Arkansas should be disappointed that a good bill that attempts to push back against federal over-regulation couldn’t even make it out of a House committee yesterday.
P.S. Remember to come to the Advance Arkansas Institute’s event with Radley Balko tomorrow! You can register here.