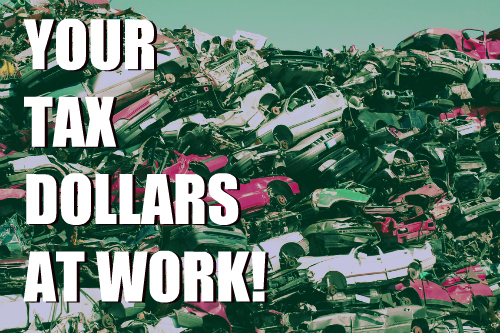 Let’s return to those halcyon days of 2009. Things were simpler then, weren’t they? Our nation’s city centers weren’t occupied; Conan O’Brien was kicking off what I’m sure will be a multi-decade run hosting the iconic “Tonight Show”; and a brash young president took office and restored our sense of hope by crushing the shit out of a bunch of cars.

You recall Cash for Clunkers, right? The Washington Post Wonkblog’s Brad Plumer points us to this handy study that provides the last word on that dandy little program, which was part of the 2009 economic stimulus package. That last word: Failure.

Or as Plumer concludes with a touch more charity, “Even if the program did have some benefits, it’s hard to argue that it was an efficient way to dole out cash.”

The Cash for Clunkers Scam

The program paid out up to $4,500 to consumers who traded in an old gas guzzler in favor of a newer, shinier, more efficient vehicle. The “clunkers,” often just a few years old, were scrapped. (A YouTube genre of perfectly good vehicles being destroyed arose in response.).

In Arkansas, more than 5,400 vehicles were traded in and subsequently destroyed, according to this Detroit News interactive map that tells you how the program performed in each state. Neat!

Skepticism of the program in 2009 was largely drowned out by credulous reports like this, from one Little Rock TV news outfit, or by interviews with auto dealers who were excitedly anticipating a bump in sales. We were so much more innocent in those times.

Meanwhile, U.S. Transportation Secretary Ray LaHood, in a fit of euphoria, declared Cash for Clunkers “wildly successful” because it ran out of money much more quickly than anticipated. (Rule: “Popular” is not the same thing as “successful,” a distinction too frequently overlooked by both the right and the left.)

But the program mostly succeeded in getting people who planned to buy a new vehicle anyway to shift their consumption a few months earlier, in order to take advantage of the federal subsidy, the analysis by Resources for the Future (PDF) found. Little lasting stimulus effect was seen.

So were the naysayers right? It seems so. A newly updated analysis from economists at Resources for the Future finds that the actual benefits of the program were pretty meager. The paper examined U.S. car sales using trends in Canada as a control group, and estimated that about 45 percent of cash-for-clunker vouchers went to consumers who would have bought new cars anyway. In the end, the program boosted U.S. vehicle sales by just 360,000 in July and August of 2009 and provided no stimulus thereafter. What’s more, the program increased average fuel economy in the United States by just 0.65 miles per gallon.

Why pick at the scab of this relatively small ($3 billion, which in today’s world is “relatively small”) program that ended two years ago? Here’s why, Jack:

1) Since we again find ourselves in the grip of stimulus-mania—this time dressed up as the “American Jobs Act”—it’s worth revisiting the failures of yesteryear to ensure they’re not repeated. And while there’s no “Cash for Clunkers” component in the recent jobs proposal, so far as I’ve seen, let’s be on guard for another soft-soap sales job of this type.

2) Autos weren’t the only “clunkers” subject to subsidies, rebates and replacement under the 2009 stimulus package—it was just the splashiest and most appallingly wasteful example. The Arkansas Energy Star State Appliance Rebate Program, for instance, distributed $2.74 million in rebates over an eight month period in 2010 to encourage purchases of new energy efficient refrigerators, washers and dryers, water heaters and so forth.

The old appliances? They were recycled. Subsidizing the destruction of perfectly good assets is a sad aim for government policy, though you can sell anything these days if you wrap it in the righteous mantle of “green energy.”

You can read the full study here (PDF). I tried to work my way through it but had to bail out when I hit this:

Was ‘Cash for Clunkers’ a Clunker? (Washington Post/Ezra Klein’s Wonkblog)

3 thoughts on “Post-Mortem: The Cash for Clunkers Flop!”