Here it is a Monday in November and you’re just sitting there thinking, “Gee, I wonder how Arkansas is doing on spending its share of economic stimulus funding, as provided under the 2009 American Recovery and Reinvestment Act (ARRA)? If only there were some way for me to check on that!” I know that is probably what you are thinking, right now.

Hey, lookee there! The state recently issued its latest quarterly progress report on stimulus spending in Arkansas (PDF), and it is just a testament to the futility, woe and despair that are now a fixture of American life in this 21st century.

The damage, tabulated: As of Sept. 30, Arkansas had been awarded more than $3.2 billion in federal taxpayer dollars for stimulus programs. More than $2.9 billion —over 90 percent—of that funding has now been spent.

How’s that been working out, based on a reading of the state unemployment rate from 2009 till now? Oh, riiiiiight: 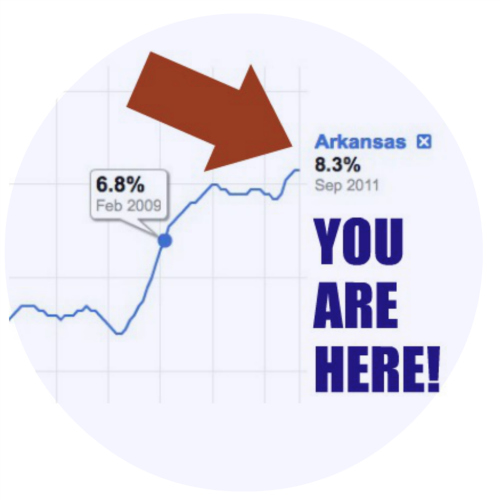 Hm. I do not think that was the result we were hoping for.

You hear a lot of belly-aching from me and people like me about the astonishing waste and abuse in the ARRA, but really, you should just go look at how the money was spent (PDF), and how comparatively little we got for the ostensible “investment.”

Also, it can’t be emphasized enough that vast swaths of the money were used simply to underwrite existing state government programs. The next time you hear someone swooning over and gassing on about Gov. Mike Beebe’s budgeting prowess, it’s worth considering how much the state budget was bolstered these last couple of years by hundreds of millions of dollars in additional federal funding under ARRA.

(And don’t forget that total government employment in Arkansas has only continued growing: The Natural State ranked seventh in the nation for growth of federal, state and local government jobs from 2007-2011, one recent study showed).

In August, we looked at the progress of economic stimulus funding in Arkansas up until the middle of this year. And just last week, we examined what will likely be the final definitive word on the billions squandered in the Cash for Clunkers program, another ill-conceived stimulus initiative about which the less said the better, but on the other hand maybe we should say more so that the terrible error isn’t repeated.

2 thoughts on “Behold The Despair Of Arkansas Economic Stimulus Spending!”