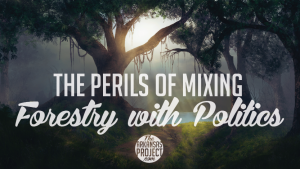 Bruce Westerman’s forestry bill is facing some opposition in the Senate.

As we’ve reported previously on TAP, the House of Representatives passed Rep. Westerman’s legislation to ease restrictions on logging and other scientific forest management techniques. This bill is aimed at reducing the risk of wildfires. Now it is up to the Senate to consider the bill. Rep. Westerman thought that the recent California fires may expedite this consideration, according to the Washington Examiner:

Everyone thought the fire season was over this year, but obviously that’s not the case in Southern California. If this doesn’t highlight the need for management reform, I don’t know what would.

However, some Senate Democrats are not happy with Rep. Westerman’s approach this bill. Among them is Sen.

Ron Wyden (D-OR). The Times reports that he “oppose[s] Westerman’s bill, arguing his approach weakens environmental reviews too much and encourages litigation against the Forest Service.”
Rep. Westerman, however, is pushing back against attempts that would gut his bill’s main provisions:

I am all for negotiating, but we want to keep in the real part of my bill that allows for management to happen. We can’t have fluff management-in-name-only kind of stuff. It has to be real reform that allows the Forest Service to do their job. We have to have a full frontal assault if we want to turn the tide.

The conflict over this legislation points to a larger issue in this debate – the role of politics in federal land management. Rep. Westerman sees the problems on Forest Service land and comes to the conclusion (correct, in my opinion) that more logging would help control wildfires. Sen. Wyden, on the other hand, does not want to weaken the laws that allow substantial public input on forest management practices.

Rep. Westerman and Sen. Wyden have a fundamental difference when it comes to how they deal with land management. This difference is partly about the science of forest management, but it’s also partly about ideology. Conservatives are generally more agreeable to cutting trees. Liberals generally like government regulation.

When government owns land, it means that politicians will manage it. These politicians’ differing views of the politicians in charge will clash. Ultimately, when you have politicians making decisions, then these decisions will be made on a political basis. What is best for the land does not necessarily take precedence. This is the inevitable outcome of the incentives built into federal land management.

At times, especially in the 1980s, there was a lot of logging on Forest Service land. That should not be surprising, given that Ronald Reagan was president. However, once Bill Clinton assumed office, a management regime that was friendlier to environmentalists emerged. Contrary to what some people like to believe, the government does not manage its property for the public good or in an impartial pursuit of what is best scientifically. Humans write the land management policies. These humans are guided by ideologies. At some point, humans who have an ideology opposed to yours will be the ones making the rules.

We are seeing these dynamics at play in the debate over Rep. Westerman’s bill. I happen to think that his approach is right, but plenty of environmentalists don’t. If his bill makes it through the Senate, these environmentalists will be very unhappy with the result. Maybe this should cause some people to rethink the idea that the federal government should be such a large landowner.