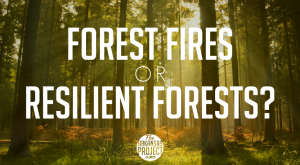 That is what Fran Alexander is recommending in a recent op-ed in the Northwest Arkansas Democrat-Gazette. She attacks Rep.

Bruce Westerman’s “Resilient Federal Forests Act,” a bill that would make it easier to remove timber from national forests to prevent forest fires, among other things.

According to Ms. Alexander, “Our national forests were established to be managed for multiple uses like recreation, wildlife habitat, hunting, grasslands and watershed protection. Timber production was not supposed to dominate those other uses.”
That really isn’t the case. The Organic Administration Act of 1897, which set up our national forest system, says this:

No national forest shall be established, except to improve and protect the forest within the boundaries, or for the purpose of securing favorable conditions of water flows, and to furnish a continuous supply of timber for the use and necessities of citizens of the United States…

This rationale for national forests – “to furnish a continuous supply of timber…”—is why the U.S. Forest Service is located in the Department of Agriculture, not the Department of the Interior. Other designations for federal land, such as setting it aside as wilderness, ensure that logging does not apply to wide areas of government forestland.

Today, however, Ms. Alexander is correct that forest service land is managed for multiple uses. Logging certainly does not dominate. As this blog post analyzing timber sale trends says, “Logging on national forests, many of them located in the West, is a shadow of its former self.”
Perhaps it is coincidental, but forest fires have been getting worse – especially in the West, where national forests are located.

Terry Anderson of the Hoover Institute singles out federal environmental rules for much of the blame:

Though everyone agrees that fuel loads are a major part of the problem, not everyone agrees on how to manage them. The Forest Service wants to use scientific management techniques—including logging, prescribed burns, and thinning—to treat forest fuel loads, but it is continuously thwarted by environmental activists who want to let nature take her course.

Environmentalists use administrative procedures and litigation to stop projects that would reduce fuel loads, claiming that those projects are no substitute for natural processes and that they destroy habitat for endangered species. According to a 2015 study commissioned by the Forest Service and done by the Bureau of Business and Economic Research at the University of Montana, between June 2012 and June 2013 administrative appeals and litigation encumbered 74 out of 125 of the proposed treatment projects in Northern Region 1—the region where many of this year’s fires burned.

Litigating is made easier by the fact that environmental groups are reimbursed for their attorney’s fees under the Equal Access to Justice Act when they prevail in their suits against the federal government. Such litigation cost the Forest Service nearly $10 million in 2013. Even when the Forest Service prevails, treatment projects are delayed for months or years, during which time the acreage is subject to greater fire risk.

Fire is a natural part of ecosystems. However, due to fire suppression over the past 100 years or so, there has been a significant build-up of fuel in forests. That fuel can either be removed through logging or through catastrophic fires. The red tape that Ms. Alexander celebrates is tying up efforts to prevent these fires from occurring.

I grew up in a heavily forested area. I’ve worked in the woods. A catastrophic fire burned our family land in 1939. You can still see the damage that fire caused today. Only within the past twenty years have trees, rather than brush, started to grow in areas where the fire burned hottest. When fires occur, federal land is not available for multiple uses. This land is, instead, devastated for years to come.
Logging is a good way to help prevent catastrophic forest fires and preserve our national forests so that we can enjoy them. Rep. Westerman is once again doing the right thing by pushing legislation that would make it easier to manage our national forests in a scientific way.