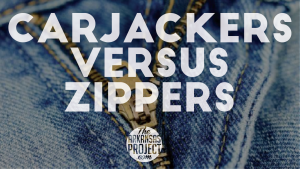 “I didn’t want someone to take my kids in a carjacking.”
Those were the words of House Speaker Jeremy Gillam during the committee hearing about the “parents’ rights” bill that this blog discussed yesterday.

The House Speaker made this statement when responding to the bill’s sponsor, Sen. Alan Clark, who had pointed out that parents could be prosecuted for leaving children in the car while making a quick visit to a store. Speaker Gillam said that he never left his children while running into Walmart, because he was afraid of a carjacking or kidnapping.

As a parent myself, I know where Speaker Gillam is coming from. Raising children involves a lot of fear. You are so concerned about your children’s well-being it’s possible to see danger in just about anything. We see this manifested in various ways today, with some parents going so far as to reject life-saving vaccinations as somehow being life-threatening.

The bottom line is just because you fear something doesn’t make that fear rational. That is the case with carjacking and kidnapping.

However, Speaker Gillam clearly doesn’t think his fear is irrational. He, in fact, referenced the “statistics” on carjacking to counter Sen. Clark’s promotion of the bill. As someone who likes statistics, I tried to track down what Speaker Gillam was talking about. What I found is that there really aren’t any statistics on carjacking available — at least none from the past fifteen years. “Carjacking,” as such, is not a distinct crime in Arkansas, and the federal government doesn’t track it as such. It’s hard to figure out how many carjackings take place or how many children are involved in them. There were also no statistics that I found that measure the length of the average carjacking as taking 37 seconds, as Speaker Gillam claimed.

There are statistics that involve kidnapping, however.

Reason magazine sums up the facts:

According to an estimate from the federal Office of Juvenile Justice and Delinquency Prevention (OJJDP), there were just 105 “stereotypical kidnappings” in America between late 2010 and late 2011, the last period for which we have data. (For reference, there were about 73.9 million children in America that year.) Just 65 of these kidnappings were committed by strangers. Less than half involved the abduction of a child under age 12. Only 14 percent of cases were still open after one week, and 92 percent of victims were recovered or returned alive.

Obviously, some children are in cars that get carjacked. There are occasional news stories that mention these incidents. These are news because they are so rare. In fact, they are so rare that there is no hard evidence on how much they happen. When it comes to federal statistics on kidnapping by strangers, these incidents essentially don’t appear.

What does that mean? It means that Speaker Gillam’s fears about his kids being kidnapped while he ran into Wal Mart are statistically groundless — or, to put it another way, those fears are not reasonable. A reasonable person won’t understand Speaker Gillam’s children as having been in danger, even if he left them in the car for a few minutes while he went shopping.

However, if we’re looking for something to fear, there are things that happen far more often than children being kidnapped while left waiting in cars. Take zipper-related genital injuries (anyone who has seen “There’s Something About Mary” will cringe thinking about this). There were over 17,000 of those between 2002 and 2010 (occurring exclusively to men). And yet there is no move to ban zippers. There are no hearings where legislators decry zippers as a public health menace. That’s because we recognize that while these injuries are a big deal to those who experience them, there are also benefits from using zippers. The risk of an injury is slight compared to the benefits of zipper usage, so millions of men operate these potentially dangerous products every day.

If you think about it, there is a slight chance of something bad happening in almost every activity we do. Walking around the neighborhood with your children, for instance, could result in a trip to the emergency room. Swimming pools are a leading cause of accidental death for children. Car accidents happen. But we still take our kids hiking and swimming; just about every day, many parents put their kids in the death machines that we call “cars.” If we’re going to try to reduce risks that are already infinitesimal, not only will this effort make our life joyless — but, just as importantly, a zero-risk world could never be realistically accomplished.

Speaker Gillam may not let his children stay in a parked car, but I’ll bet he owns several pairs of pants — and I imagine some of them are even equipped with zippers. It’s irrational to fear that carjackers will kidnap your children — but not to fear the far more dangerous menace of zippers. I understand being afraid of what may happen to one’s children, but public policy cannot and should not be based on groundless fears.