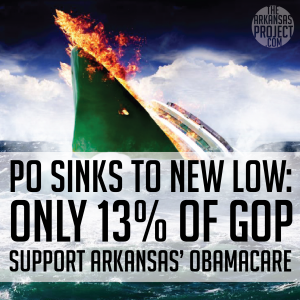 Yesterday, Impact Management released a new poll showing Congressman Tom Cotton leading Senator Mark Pryor 47-43% in the race for U.S. Senate. More impressively, Cotton is also winning independents 56-28%. But there’s another data set in the Impact poll that will be of great interest to Arkansas taxpayers.
Pollsters asked respondents if they opposed or supported the legislature’s plan to expand Medicaid through Obamacare by using “private insurance.” 44% of respondents said they oppose the plan; only 35% said they support. Among Republicans? Approval ratings are in the teens.
Just 13% of Arkansas Republicans now support the so-called Republican plan to “reform Medicaid” and 65% oppose — a margin of five-to-one:

A January Talk Business poll showed an approval-disapproval margin of 18%. In May, a second TB poll showed a margin of 31%. Now, at 65-13%, that margin stands at 52%.
Two key takeaways from this latest survey:
1. The Obamacare expansion — which has long been politically toxic — is becoming more toxic by the day. Don’t just take my word for it: read these poll numbers again. The only way the approval numbers could get lower is if pollsters removed legislators and their mothers from their polling sample.
2. It’s not just the “tea party” that opposes Obamacare expansion. In the throes of this year’s fiscal session, the media establishment — here and across the country — was quick to blame tea partiers for the resistance to adding 200,000+ people to a new entitlement program. The state’s premiere liberal tabloid ran the headline, “Arkansas Tea Party Republicans make war on working poor.”
But it’s not just “tea party” Republicans that oppose the Obamacare expansion plan — it’s virtually all Republicans, a majority of Independents, and even some Democrats. These are people who understand that $17.5 trillion in debt is a serious thing and that creating new entitlements creates more dependence on government. Those are principles that transcend partisanship and political ideology.
It’s a sad state of affairs for legislative Republicans who eagerly locked arms with Governor Beebe and attempted to usher in a new era of Obamacare bliss. If only someone could’ve predicted that this was a losing strategy.

4 thoughts on “New Poll: It’s Over for Arkansas Obamacare”