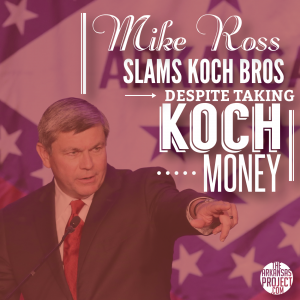 Mike Ross made a curious statement recently when speaking at a Democratic Party meeting in Howard County.
Mike Ross said:

Bashing the Koch brothers is a favorite pastime for many Democrats, but Ross should know better. When he was in Congress, he received the most financial love from the Koch brothers of any Arkansas House member since 2007!
From the Baxter Bulletin in September 2012:

In the final weeks of his 2014 campaign, perhaps Ross should spend some time thanking the Kochs for their generous donations throughout his political life, because it’s looking increasingly likely that his political life will be over for good after Arkansans go to the polls in November
P.S.: For more background on the Koch brothers, here is a good Washington Free Beacon article about the Democrats’ failed war on the two philanthropists.

One thought on “Mike Ross, Ingrate”