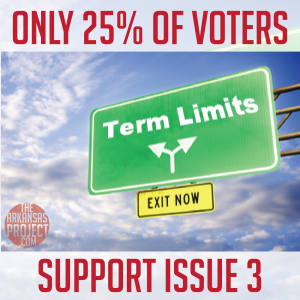 We wrote recently about the disdain certain state legislators have for ordinary Arkansans who don’t think weakening term limits through Issue 3 is such a swell idea.
According to recent polling from Talk Business, voters are seeing this issue for what it really is: an attack on term limits.
From Talk Business:
We have polled two of the measures on the ballot previously and the results from this survey suggest stability in Arkansans’ attitudes on them. In an April survey, the multi-part ethics measure that was sent to the voters by the legislature as Issue 3 was trailing badly with only 25% approving and 57% disapproving. This most recent poll of Arkansas voters, following some attacks on the proposal for its loosening of the state’s term limits provisions, shows some movement in an unfavorable direction. The measure is particularly unpopular with older voters (over two-thirds of those over 65 oppose the measure). In terms of partisanship, it is slightly more popular with Democrats (30% support and 55% oppose) than with Republicans (18%-66%) and Independents (23%-64%). It is also slightly more popular with women than with men.
This new poll supports our thesis presented last week: namely, the real “nuts” outside the mainstream of  Arkansas politics are those that support Issue 3.