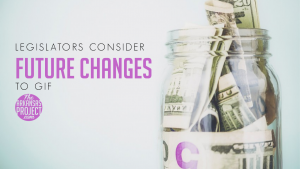 The state’s grant system for funding local projects is due for a change after Arkansas’s Supreme Court ruled it unconstitutional last week.

In an interview Friday, Dismang said he would like to see both the legislative and executive portions of the General Improvement Fund moved into a single pot of rainy-day funds. Spending money from that fund requires a request by the governor and approval from Legislative Council.
“That’s a transparent process, the public is made aware through the governor’s letter … and there can be discussion” in the Legislature, Dismang said.
Asked about Dismang’s proposal, Wilson said he thought it could be one way to ease his concerns.
“There are all kinds of things that any excess revenue could be dedicated to, but that will have to be thought out well in advance,” Wilson said.

Trent Garner said in an interview with The Arkansas Project Monday afternoon that conversation on how grants for local projects are approved “will naturally come up during fiscal session” next year.

I appreciate that the courts made this decision. I think the people of Arkansas want a better system. In light of some of the corruption that has come out and could potentially come out in the future we have an obligation to create a better, fairer system that helps everybody in Arkansas.

Garner said what projects get approved under a new system should be decided by the legislature without dictation from the executive branch. Garner sponsored legislation in the previous legislative session that would’ve ended the General Improvement Fund program and replaced it with a “Taxpayer Long-term Protection Fund” for emergencies and budgetary shortfalls.

Instead of me as an individual legislator dictating what gets approved, I think it needs to go through the whole General Assembly and we approve it. This is a legislative issue. Some of the comments I’ve read seem to say we should allow the Governor to request it to us and we approve it. While I’ll always take what the Governor says at a very high value, we have the power of the purse. It should come from the Legislature first. We can work with the executive branch, but we shouldn’t require the executive branch to dictate where we move money moving forward.

It remains to be seen what system will replace the old GIF program. As long as such grants are approved by the General Assembly or the Legislative Council when out of session, the new system will be a vast improvement.