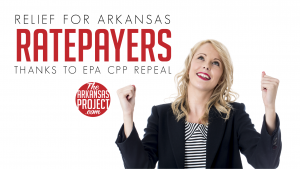 The Trump Administration will soon begin the process of repealing the Obama-era Clean Power Plan (CPP) that would’ve led to large increases in utility costs for average Arkansas ratepayers.

Trump signed an executive order in March ordering the EPA to review the CPP and other environmental regulations.

The Trump administration will formally propose repealing former President Barack Obama’s sweeping plan for curbing greenhouse gas emissions from power plants by arguing it went beyond the bounds of federal law, according to documents obtained by Bloomberg News.

The Environmental Protection Agency won’t prescribe an immediate replacement to the plan, and instead will soon ask the public to comment on whether — and how — to curb carbon-dioxide emissions from coal and natural gas power plants, according to a draft of the proposed rule and other government documents.
The proposal, set to be unveiled in coming days, is a first step to delivering on President Donald Trump’s promise to rip up the Clean Power Plan, which served as the cornerstone of Obama’s climate change agenda. Trump moved to pull the U.S. out of the global Paris climate accord, and in the past he has dismissed global warming as a hoax.
Obama’s initiative was designed to cut U.S. carbon dioxide emissions 32 percent below 2005 levels by 2030. Because of legal challenges, it never actually took effect. The U.S. Supreme Court put it on hold in February 2016.

Repealing this regulation was one of the campaign promises made by Trump as a candidate.

A study by the American Coalition for Clean Coal Electricity (ACCCE) found that Arkansans would face an average annual electricity price increase of 20 percent resulting from utility companies’ increased compliance costs under the regulation.

These costs would be in exchange for relatively non-existent environmental benefits. According to the Texas Public Policy Foundation, the CPP would potentially reduce global temperatures by .03 degrees (in other words, about one-thirtieth of one degree) by 2100.

All in all, this news is another good sign that  Trump is serious about removing burdensome federal regulations that harm average Americans.