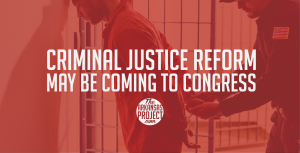 There is not much upon which Republicans and Democrats in Congress agree. However, even in these polarized times, there does appear to be one area of common ground: criminal justice reform. Legislation to introduce some long-overdue changes to the federal sentencing and prison system is on the verge of passing Congress. Members of both parties are embracing this bill. At least, most members are on board with these reforms.

The bill in question is HR 5682, the First Step Act. It has the backing of a diverse coalition of interest groups, from the American Conservative Union to more liberal groups. President Trump wants to see it pass. Even the Fraternal Order of Police is backing it.

One of the main aims of this legislation is to encourage enrollment in programs that are aimed at reducing recidivism. Here are a few of the other provisions of the First Step Act. It:

There are other reforms being considered in the Senate version of the bill, including ending federal “three strikes and you’re out” mandates and allowing judges to deviate from mandatory minimum sentences for nonviolent drug offenders.

On the other hand, this is a major piece of legislation. It signals the reversal of the “tough on crime” approach that was embraced by both Republicans and Democrats starting in the 1980s. This is due in large part to the growing evidence that these policies did not work and, in fact, perpetuated a lot of societal problems (not to mention a large growth in government).

Senator Tom Cotton of Arkansas has played a key role in efforts to stop this bill from advancing in the Senate. While many of his Republican colleagues recognize the need to have a more nuanced approach to criminal justice, Sen. Cotton has continued to champion the older policies that stress tougher sentences and more prison time.

Sen. Cotton’s approach has earned him detractors on both the left and the right. In fact, FreedomWorks published a long blog post countering some of the reasons he gave for opposing the First Step Act.

J.C. Watts, a former Republican member of Congress from Oklahoma, wrote in a recent op-ed about why conservatives should embrace this legislation:

Across the country, conservative states like Texas, Georgia, South Carolina and Utah have passed similar reforms to what is included in the First Step Act. Even though these states have reduced their prison populations, crime rates continue to be near decade lows. Equipped with this knowledge, Republican lawmakers at the federal level want to follow suit and pass the most comprehensive reforms to the federal system in our lifetime.

This legislation certainly isn’t perfect. In fact, some groups, such as the American Civil Liberties Union, blast it for not going far enough in making criminal justice reforms. However, it is difficult to see why a bill with such strong bipartisan and cross-ideological support has taken so long to clear the Senate. Perhaps that injustice will be rectified by the end of the lame-duck session.