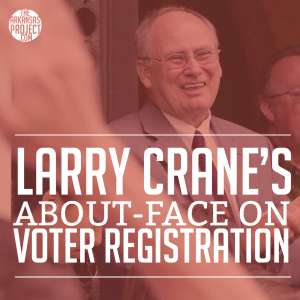 Crane – who was well aware that something had already gone dreadfully wrong with Rutledge’s registration, through no fault of her own – had plenty of discretion to assume that Rutledge had substantially complied with the registration process. Crane could have concluded that, given the obvious procedural failures that Rutledge had already fallen victim to, she had already suffered enough. Indeed, he conceded that someone who is issued a voter registration card has the right to vote at the polls. I think he could have said “You know, I’m already on record as contributing to the campaign of Rutledge’s opponent. She’s already been the victim of a significant bureaucratic foulup – a foulup in which my office might be the party at fault. I’m really going to look like a partisan hack if I argue that I’m compelled to yank her registration.”

You’ll recall that Crane went ahead and cancelled Rutledge’s registration on technical grounds: namely, that she didn’t use the right form in order to register to vote. Apparently, the risk of looking like a partisan hack was one he was willing to bear.
However, according to one of our sources (a former employee of the Pulaski County clerk’s office), Crane’s posture used to be very different when it came time to register voters.
We’re going to keep our source’s identity secret — largely because he has legitimate worries about political retaliation at his current job — but the information he gave us makes it appear that Crane’s concern about perfect technical compliance with voter registration rules is of recent origin. For instance, according to our source, during the 2012 elections, employees at the Office of Driver Services were mistakenly handing out address change forms — instead of voter applications — to people attempting to register to vote.
What that means is that, due to technical mistakes on the part of employees at the Office of Driver Services, the Pulaski County clerk’s office was flooded with applications from people who thought they were registering — but, as a technical matter, they weren’t.
So did these folks’ registration get cancelled by Larry Crane? Nope.
According to our source, the clerk’s office allowed these technically non-compliant registrants to vote provisionally and then to fill out a new application when they cast their ballot. The clerk’s office then backdated their registration date to the day the technically non-qualifying registrants performed a mistaken address change — instead of forcing each one to re-register, which is what Crane did in the case of Rutledge.
Remember, this is the same Larry Crane who explained that “Once I step in these doors, then I become totally neutral and everyone that walks into this office gets treated with respect and dignity.” Color us skeptical.
In short: not only does this blog disagree with what Larry Crane did to Rutledge, Larry Crane from 2012 disagrees with what Larry Crane did to Rutledge!
Regrettably, neither Larry Crane returned our request for comment.

One thought on “Larry Crane’s About-Face on Voter Registrations”