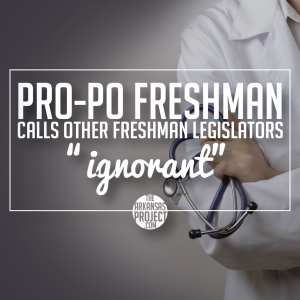 The Arkansas Advocates for Children and Families road-show to save the “private option” (Medicaid expansion) got off to a less-than-stellar start yesterday.
From NWAOnline:

“If the private option doesn’t pass again, it’s going to kill Asa Hutchinson’s budget,” said Jana Della Rosa, a Republican who was elected last month to serve House District 90, in Benton County. “There’s such a huge hole that suddenly appears.
“I don’t think there’s really any interest in doing that,” she said. “I think once a lot of these freshmen understand that that’s the true scenario … I think some of them will come on board with it.”
Della Rosa, who will be a freshman legislator in January, said people who decide to run for office often don’t know all the details about complicated topics like the private option.
“There are a lot of issues that we don’t know anything about,” Della Rosa said. “I think there’s a lot of ignorance on the part of the freshmen coming in, not stupidity, but ignorance.”

Anti-”private option” State Sen. Bryan King said of Della Rosa’s comments that “she’s been hanging around Joe Biden and Jonathan Gruber too much.”
As we’ve said previously, the 2014 elections were terrible news for legislators and lobbyists looking to keep the “private option” in its current form. Basically, pro-”private option” folks will be forced to do some major outreach and change a lot of minds if they have any hope of saving the program in its current form.
Now, it’s been awhile since I’ve read Dale Carnegie’s How To Win Friends and Influence People, but saying, as Della Rosa was quoted, that incoming freshmen (a sizable amount who — not coincidentally — oppose the “private option”) are coming in with “a lot of ignorance” sounds like a sub-par way to win over hearts and minds.
I e-mailed Della Rosa to ask her if she included herself in that group of incoming freshmen who have “a lot of ignorance.”
From Della Rosa:

I include myself in the statement.  The PO is very large and complex and every freshman legislator I have spoken to (which granted is not all of them) have expressed a desire to get more information.  My comment was not in any way meant to insult anyone.  Ignorance is merely the absence of knowledge about a topic, not the absence of intelligence.  I was trying to point out that we all need a LOT more information and that we are trying to work together to come up with a solution.

I also asked her if she was concerned about 2017 — when the state has to start paying its share of the “private option” program’s cost, instead having it paid for completely with “free” federal money. A “huge hole” in Asa Hutchinson’s budget is most certainly going to start appearing then. This budget hole is one that groups like Arkansas Advocates for Children and Families and pro-”private option” legislators don’t like to talk about.
From Della Rosa:

Yes, this is a concern also.

It’s not clear to me why an alleged “huge hole” in Asa Hutchinson’s budget in 2015 is  such a calamity, but a continuous “huge hole” in Asa Hutchinson’s budgets starting in 2017 is just a “concern.”
For what it’s worth, I’ve talked to many incoming anti-”private option” and seen their comments to the press during their campaigns. Most seem to be asking the questions that legislators should be asking about any government program. How will it be paid for? Is this program within the proper role of state government? Can we trust the federal government to uphold its rosy promises to the state, or will it eventually force Arkansas state taxpayers to pay for an even higher percentage of the bill than it has promised?
It’s almost enough to make you wish there had been more of this ignorance of these freshman legislators in the Capitol when leaders in state government decided to make the mistake of expanding Medicaid in 2013.