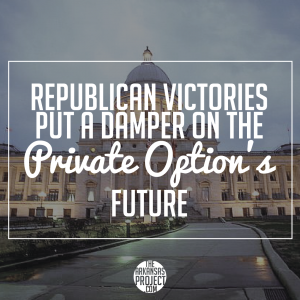 Now that the rubble has stopped bouncing, much of the Arkansas media has been reacting to last night’s big story: unprecedented Republican wins in the U.S. Senate race, the state’s seven constitutional offices, and both houses of the state legislature.
Arkansas hasn’t seen anything like this for more than a century: last night was a historic landslide for the Republican Party in this state.
Certain liberal newspaper columnists this morning seemed apoplectic over the results:

One of the first policy discussions Republicans will have heading into the 2015 legislative session will be, once again, the future of Arkansas’s Obamacare Medicaid expansion, also known as the “private option.”
Due to numerous anti-Medicaid expansion Republicans winning in the House — and two new Republicans in the Senate — the conversation has changed. Before election night, political wonks were trying to figure out what sort of transformations the private option would have to undergo in 2015. Today, a more appropriate question is: does the private option have anything like a realistic chance of survival?
If you think this is just talk coming from the alleged “conservative echo chamber,” here’s Brummett on the PO after the election results:

In a sign of the strange political times we’re living in now, David Ramsey of the Arkansas Times is apparently pinning his hopes on rumors from “GOP insiders” that governor-elect Asa Hutchinson will be so supportive of the program that he will be able to procure the needed 75 percent of votes in both chambers needed to fund it.
Yes, Asa Hutchinson is now — in the eyes of some — the last-ditch defense for the private option. Maybe some people really believe in this theory, but we wouldn’t bet on it. In fact, we suspect that quite a few readers of the Arkansas Project might raise an eyebrow at the notion that Hutchinson is a private-option sleeper agent (or, you might say, a Manchurian advocate). There’s a decent chance that the “GOP insiders” Ramsey is relying on are just blowing smoke.
Here’s how we know that’s true. Just hours ago, David Goins of Fox 16 reported (and the Arkansas Times re-reported) that Russellville state Senator Michael Lamoureux is about to be hired as Governor-elect Hutchinson’s chief of staff. If you’re really trying to advance the private option, discarding a scarce Senate vote in favor of it is a very risky move.
In fairness, Hutchinson has been less than definitive when discussing his views on the private option — but in a sense, that is understandable: this is an issue that will in large part be decided by the state legislature. It’s easy for a legislator to explain how he or she will vote, but it’s harder for a governor to guarantee a policy result.
In any event, the private option is going to be increasingly difficult to sustain: the state will begin paying its share of the program’s cost in 2017 — right before Hutchinson is up for re-election in 2018. Having to raise taxes and/or cut prisons and K-12 funding to fund a health insurance program for abled-bodied adults isn’t a problem a first-term governor wants to have going into re-election. The private option also presents a huge political problem: many Republican legislators have become weary over how divided their caucus has been in the past 18 months over Medicaid expansion. Until the issue is eliminated — or the private option becomes normal and uncontroversial — the political pain that it has caused will continue to be at the center of intraparty warfare. In short, Brummett’s report of the death of the private option is not highly exaggerated.