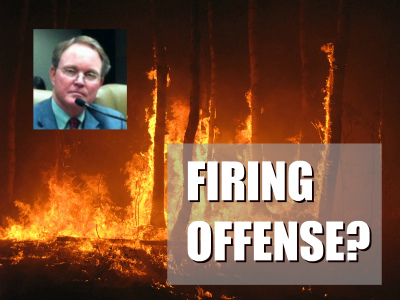 Arkansas Forestry Commission chief John Shannon is feeling the heat now that his agency is some $4 million in the hole—and Gov. Mike Beebe’s asking lawmakers for an extra $2.7 million to clean things up at the gravely mismanaged agency.

Forestry Commission Director John Shannon and Tim Leathers, deputy director of the state Department of Finance and Administration, told a legislative panel that the governor plans to ask for about $2.7 million in supplemental aide for the commission.

The request will include about $1.2 million to repay the federal government for grant money the agency improperly spent on ongoing expenses and about $1.5 million to keep the agency going through the end of the fiscal year.

Shannon said last month he told 36 employees of the 298-person agency they will be laid off Jan. 13 because of a $4 million shortfall.

Read Lyon’s whole piece for the sordid details as to how we arrived at this impasse.

But the key question, as presented in the headline to this post: Just what DOES it take for an agency head to lose his or her job in the Beebe administration?

After all, in recent months, we’ve seen reports of tens of millions of dollars in waste from the Department of Workforce Services, and now the state Forestry Commission is limping thanks, in part, to some highly questionable accounting practices. Yet the agency leadership just keeps bumbling along from one catastrophe to the next. Quick! Someone find me one more example of malfeasance so we can officially deem it a trend!

The crowning quote in the tale comes from DFA’s Tim Leathers, who here raises the use of the evasive bureaucratic passive voice to something near an art form. Leathers explains the effect of those aforementioned improperly spent grant funds:

State officials have said they recently learned that the federal money was overcertified, or counted twice, and was not authorized for ongoing expenses.

“You had overspending as a result of that,” Leathers told legislators today.

Indeed! “You had overspending.” But no one one was actually accountable for that overspending. It simply….happened. “You” had it. It—this overspending—it was “had,” by someone, that someone being “you.” QED.  No further questions, please.

Let’s run an experiment: Go f**k something up disastrously in your job, and then come back to your bosses and tell them you can fix it up if they’ll only give you some more money. Oh, I don’t know, let’s say, $2.7 million. Let me know how that works out for you.

Oh, if only John Brummett were still alive to write a column about how this is really all the fault of legislative Republicans and the Tea Party, or something. RIP, John Brummett (1946-2011).

3 thoughts on “Forest Fracas: Just What DOES It Take To Lose Your Job In the Beebe Administration?”