A lot of interest from our post yesterday about the federal government’s report that Arkansas had made more than $161 million in improper unemployment insurance payments over the last three years.

So much so, in fact, that the question of just what happened to all that cash was a matter of interest to state lawmakers, who grilled Artee Williams, the director of the state Department of Workforce Services, at a legislative hearing this morning as to what the hell was going on.

Williams didn’t have much in the way of clear answers, but said his department is reviewing their records now to determine the amount of the overpayments, reports the AP’s Andrew Demillo.

You’ll recall, too, that Williams is a recent addition to the proud cadre of highly paid “double-dippers” in Gov. Mike Beebe’s administration, as blogger Jason Tolbert reminds us today. Williams “retired” quietly in July only to be rehired a month later, so now he’s collecting both a state pension AND a six-figure salary for this stellar performance. One can presume that Gov. Beebe’s now kinda wishing he’d changed the locks while Williams was out on retirement.

If it’s any consolation, the state unemployment rate rose last month to 8.3 percent, marking four straight months of increases. Wait a minute, that’s no consolation at all….

I was feeling kind of bad for Artee, having to account for all those tens of millions of dollars in lost funds, so I’ve pledged to help him crack the case: 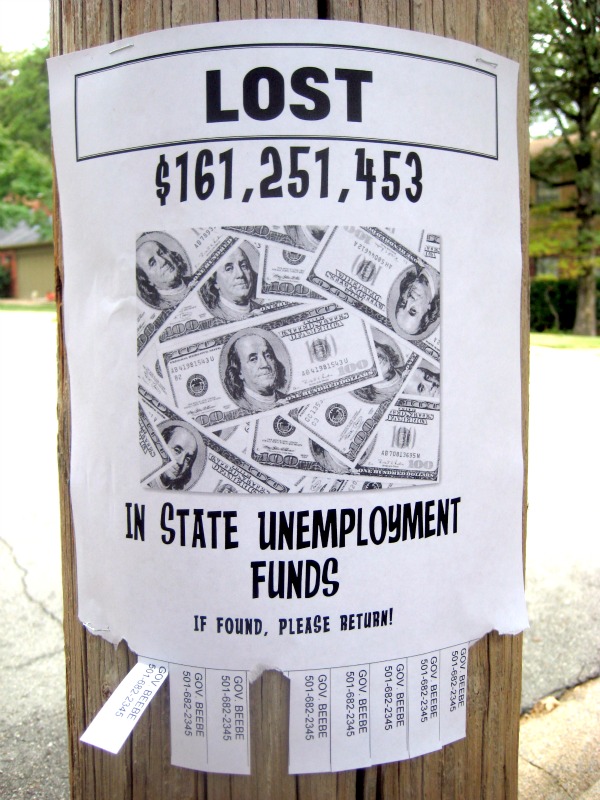 Remember kids: If you SEE something, SAY something!

3 thoughts on “Who Will Crack Case of the $161 Million in Missing State Unemployment Funds?”