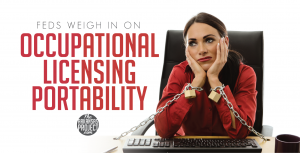 The state has erected a lot of barriers for Arkansans looking to work. Thankfully, Governor Asa Hutchinson recognizes the problem with these occupational licensing laws. He convened a working group to provide recommendations for reform. That working group’s members would do well to read a new report by the Federal Trade Commission on how to improve the portability of these licenses across state lines.

As this report points out, state licensing laws make it very difficult for licensed professionals to move across state lines and practice the same occupation in a new state:

A key barrier imposed by licensing is the inability of qualified professionals licensed by one state to work in another state. There is little justification for the burdensome, costly, and redundant licensing processes that many states impose on qualified, licensed, out-of-state applicants. Such requirements likely inhibit multistate practice and delay or even prevent licensees from working in their occupations upon relocation to a new state. Indeed, for occupations that have not implemented any form of license portability, the harm to competition from suppressed mobility may far outweigh any plausible consumer protection benefit from the failure to provide for license portability.

There is little consumer benefit from one state restricting someone’s ability to work simply because that person obtained a professional license to do that job in another state. Instead, these laws work to restrict competition for the benefit of the in-state professionals. That may be good for those with the political pull to influence legislators to enact licensing laws, but it is bad for workers, consumers, and the general public.

The FTC report gives some good ideas for how states can make it easier for workers to move across state borders and resume their profession without too much state interference. Among its ideas:

These are solid ideas that Arkansas should certainly consider. The working group would do well to read this report in detail and consider how the state could implement these ideas. Doing so would help attract high-skilled residents to the state. That is not only good for these individuals, but it is also good for the economy and consumers.

While portability is a good way to reduce one of the harmful aspects of occupational licensing, it does not address all of them. Tomorrow I’ll explore this issue further by discussing the need to remove many occupational licenses completely.