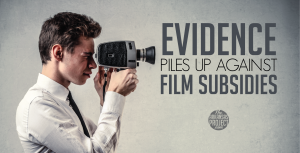 Who is not blinded by the Hollywood lights? People who research the effects of film subsidies. Study after study shows that no state has a subsidy program that produces the promised results. Two state think tanks have recently looked into this issue.

The payoff from “investment” in the entertainment industry is dismal. Dozens of studies have been undertaken to determine the ratio of subsidization to tax-revenue generation. The Rio Grande Foundation has distilled the best research down to 14 analyses, conducted in states as varied as Pennsylvania, Louisiana, Oklahoma, North Carolina, and Massachusetts. All were performed by either legislative auditors or tax departments, and not one was issued by Hollywood consultants, economic-development/film bureaucracies, or ideological think tanks of any perspective. When taken as a whole, the 14 studies found the average “return” for a taxpayer dollar to be an appalling 23.6 cents.

The Beacon Center of Tennessee undertook an extensive report that examined these subsidy programs. Here is what that report concluded:

The best way to encourage economic growth and development are broad-based reforms such as tax and regulatory reform. Corporate welfare tends to overpromise and under-deliver in terms of jobs and economic benefits. Film incentives are perhaps one of the worst examples of the government picking winners and losers and subsidizing one industry on the backs of others. The incentives never “pay for themselves” through generated tax revenue, therefore diverting needed funds from legitimate government services. Additionally, film and other media projects are generally a risky investment.

This backs up what I discussed in a 2015 report for AAI on these subsidies. That study found:

…when independent studies are done to look at the actual effects of these subsidies, they rarely (if ever) live up to such grand expectations. In states around the nation, film subsidy programs have failed to “pay for themselves” in terms of increased tax revenue. Their track record for job creation and economic growth is weak. They divert money away from necessary government functions, such as prisons and highways. In short, these subsidies by and large enrich Hollywood producers at the expense of state taxpayers.

With the evidence against the effectiveness of film subsidies getting stronger all the time, will Arkansas legislators continue to support them?