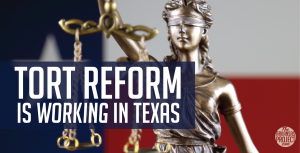 Perhaps the hottest topic this election year in Arkansas is Issue 1, the tort reform amendment. Assuming the state Supreme Court does its job and allows the votes on this measure to be counted, Arkansas will be deciding in November whether to embrace or reject tort reform.

The debate over tort reform is nothing new. Texas had a similar measure, Proposition 12, on its ballot in 2003. Voters there supported Proposition 12, and that state has been living for 15 years under rules similar to what Issue 1 would deliver to Arkansas.

The results from thepassage of Proposition 12 show why it’s so important to enact something similar in Arkansas, as a recent SE Texas Record article illustrates.

Roger Borgelt, who is part of Citizens Against Lawsuit Abuse of Central Texas, said, “Back in 2003, the rate of physician licensure was shrinking not just relative to the booming population, but also in absolute terms. This put a dangerous strain on the state’s medical resources as the population grew rapidly. Since then, we’ve seen annual physician licensure more than double.”

Since Proposition 12 passed, the number of physicians in high-risk specializations — such as vascular surgery, neurosurgery, and emergency medicine — has increased by more than 60 percent, as many doctors in those specializations no longer fear getting hit with a frivolous lawsuit.

Additionally, the benefits of Proposition 12 have extended to remote and traditionally under-served areas of Texas. Since 2003, sixty-one rural counties have added an emergency medicine physician, including 45 rural counties than previously had none.

The trial lawyer lobby is trying to confuse people about what’s at stake in Issue 1. Arkansans should not forget about the real benefits that can come with tort reform. It seems that every politician running for office talks about improving health care in the state. Tort reform has the real potential to do that – without spending any taxpayer dollars to accomplish this.

Incidentally, if groups and individuals opposing abortion weren’t so busy perverting the “pro-life” label to protect the income of trial lawyers, you’d think they’d be interested in this information. After all, greater access to health care means that more people have the potential to receive services that save or extend their lives. Isn’t that more related to valuing human life than protecting lawyers who enrich themselves at the expense of their clients through exploitative contingency fee contracts?