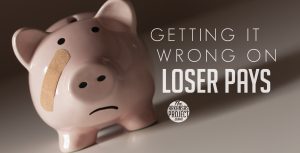 Should the losing side in a lawsuit have to pay some or all of the winning side’s attorney fees?

That question – whether a “loser pays” legal system is a good idea – is not on the ballot this November. And yet the lawyers opposing Issue 1 keep raising it. As they do so, it undercuts their case against Issue 1.

One of those talking about this is Little Rock Attorney Jess Mallett, who is also running for the legislature. According to Mallett, upon passage of Issue 1, “One of the first rules [legislators] would implement is a loser-pay system, which would close the courts to everyone but the wealthiest and the corporations.”

Is “loser pays” really “one of the first” reforms that legislators would make to the state’s legal system if Issue 1 passes? I doubt it. Such a major change would require a lot of debate and study, so I hardly think that any such thing will be rushed into law in 2019 if Issue 1 is successful.  In fact, the only people really talking about moving to a “loser pays” system are the lawyers attacking Issue 1.

But let’s say that legislators do consider this type of reform for Arkansas. Will it have the dire consequences that these lawyers are claiming? I don’t think so.

There are already numerous rules in U.S. law that require losers to pay the attorney fees of winners. This procedure is far more widespread in other nations. In fact, the U.S. is an outlier by requiring each side to pay its own attorney fees, regardless of a case’s outcome.

It is difficult to see how a “loser pays” system benefits only “the wealthiest and the corporations.” In today’s system, the wealthy have a huge advantage because they can far more easily afford to pay lawyers than can those with more modest incomes. They can use their wealth to file low-merit suits that are aimed more at burdening the opposing party with high legal costs rather than prevailing in court.

Anyone wishing to learn more about “loser pays” should read the Cato Institute’s Walter Olson and the Manhattan Institute’s Marie Gryphon. They explain how such a system would really work, and it is in stark contrast to the scare stories provided by Arkansas trial lawyers.

Reasonable people can disagree on the relative benefits and demerits of a “loser pays” legal system. I would hope, however, that regardless of one’s view on “loser pays,” a reasonable person would agree that this is an issue of public policy. That is, this is an issue that should be debated and decided by officials elected to make policy – namely, legislators.

Let’s say that “loser pays” is broadly popular with Arkansans. If legislators wanted to implement such a system, they would find it difficult or impossible to do so under the current interpretation of the state constitution. Regardless of the strength of the majority in favor or the number of legislators who want to see a “loser pays” legal system, there would probably be no way to enact it unless a handful of lawyers in robes agreed. (This is because a loser-pays reform would almost certainly have to change the rules of civil procedure, even though the Supreme Court has previously declared that such changes by the legislature are off-limits.)

Preventing the legislature from making policy decisions just isn’t right. Certainly, some ideas are off-limits to legislation. That is why we have constitutional protection for speech, the exercise of our religious beliefs, and many other rights. But a public policy idea like “loser pays” is not in the same category. It is an idea that may or may not be a good one, depending on your views, but it is something that is well within the bounds of permissible government practice.

And yet those arguing against Issue 1 implicitly acknowledge that such a policy measure could not be implemented in the state without first changing the constitution. That is an amazing admission that, in my mind, argues in favor of Issue 1.

If the state judiciary has allocated to itself such power that the representatives of the people cannot implement broad public policy changes to the state’s legal system, then that is a problem. No matter what you think about the merits of “loser pays,” this should disturb you.