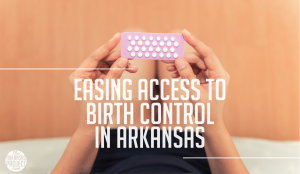 Arkansas is #1 – in teenage pregnancy. The state has the highest teenage pregnancy rate in the nation, a superlative that the state isn’t touting on its promotional material. However, there may be a policy fix that could reduce this rate. Allowing pharmacists to dispense oral birth control without a prescription could be an easy way to take Arkansas down a notch or two in these rankings.

Rep. Aaron Pilkington has introduced HB 1164, a bill that would allow pharmacists to dispense oral contraceptives (“the pill”) without a prescription. Currently, women must make an appointment with a doctor to get a prescription, then go to the pharmacist to get that prescription filled. That may not seem like a big deal, it can be a real barrier. Marc Hyden and Courtney Joslin of the R Street Institute discuss why:

…Arkansans have limited access to medical care, thanks in large part to a massive doctor shortage throughout the state. In fact, Arkansas has one of the lowest physician-to-population ratios in the country. But even when doctors are available, medical care can be cost-prohibitive for many Arkansans — especially given that the state has one of the highest poverty rates in the nation.

In addition to this issue, doctor’s visits can be time-consuming — especially because of the low physician-to-population ratio — and some women simply do not have the time to travel to the nearest physician and wait in a doctor’s office. The combination of these factors discourages women, especially those without insurance, from visiting a doctor to obtain birth control.

Hyden and Joslin explain the financial issues that this could help address:

While women bear the brunt of these unnecessary medical regulations, the costs associated with the current birth-control policy weighs heavily on taxpayers, too. In 2010, the public funded the medical expenses associated with over 72 percent of unplanned pregnancies in Arkansas, which cost taxpayers over $328 million — nearly $62 million of which was funded by Arkansans. Considering that many of these unintended pregnancies could have been prevented with easier birth-control access, Rep. Pilkington describes the current system as “fiscally irresponsible.”

Other states have enacted similar legislation. It makes a lot of sense for legislators to look at this for Arkansas. There is no medical reason why women should be forced to go to a doctor to receive a contraception prescription. There is no logical reason why the state should keep barriers in place that prevent women from accessing the contraception they need. It will be interesting to see how Rep. Pilkington’s bill fares.