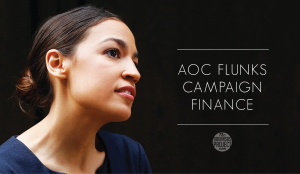 Freshman Rep. Alexandria Ocasio-Cortez certainly knows how to garner media attention. From her policy proposals to her fashion, she has the kind of press coverage that members of Congress who have decades of experience can only envy. And, as has been pointed out in many other places, her time in the spotlight is often marred by her tendency to get things wrong.

Such is the case with her recent remarks on campaign finance reform.

During a hearing on H.R. 1, legislation that would, in part, stifle free speech regarding public policy issues, Rep. Ocasio-Cortez spun a hypothetical case about how a “bad guy” would legally use the current campaign finance system to get elected and enrich himself and his cronies. She talks about how someone could use a “dark money” funded campaign, pay off people using campaign funds, and rely entirely on special interest money to get elected.

It was a social media sensation, with many people praising Rep. Ocasio-Cortez for explaining “how things really are” in easy-to-understand terms.

Her performance was certainly compelling. She knows how to tell a good story. She does not know how to tell a story about campaign finance accurately, however.

Our friends over at the Institute for Free Speech wrote a good blog explaining some of the errors she made about how campaign finance laws work. Among other things, Scott Blackburn of IFS explains that “You cannot use campaign funds for non-campaign related expenses,” “’Dark-money funded campaigns’ are not a thing,” and “’Special interest’ money does not dominate campaign coffers, even of the candidates you don’t like.”

I’d urge you to read the blog to understand the way that campaign finance law really works and the nuances that Rep. Ocasio-Cortez ignored in the quest for a viral social media moment.

IFS Chairman Brad Smith, a former chairman of the Federal Elections Commission, was also at the hearing. There is video of him explaining some of the flaws in Rep. Ocasio-Cortez’s story (strangely, his video did not become a social media sensation). Although Smith does not have the compelling on-camera charisma of Rep. Ocasio-Cortez, he does have the advantage of knowing the facts about the topic at hand. For that reason, anyone who watched her clip should also watch his.

Blackburn explains that the fundamental flaw of Rep. Ocasio-Cortez is that she appears to view the world in black-and-white terms: she is a good guy and her opponents are evil. If you oppose legislation supported by the “good guys,” then you are a bad person. That just isn’t how the real world works, he notes:

Opponents of H.R. 1 are not bought by the fossil fuel industry, or big pharma, or some other nonsense. There are many legitimate gripes with how this 570-page monstrosity of a bill hurts the fundamental First Amendment rights of all Americans. Ocasio-Cortez and supporters of the bill may think that those costs are outweighed by the benefits, or that it is more important to cast the symbolic anti-corruption vote than to deal with the policy ramifications of their proposal.

But they should at least learn how the system actually works now before they become so certain of how to fix it.

We’ve discussed H.R. 1 on TAP in the past. No matter how many good stories Rep. Ocasio-Cortez tells to support the bill, she cannot change the fundamental flaws at the heart of the legislation.