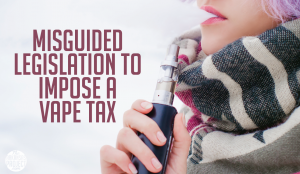 If you use e-cigarettes or vape, Sen. Will Bond is targeting you for a huge tax increase. He wants to tax e-cigarettes and vaping products at the same rate as tobacco cigarettes. That would be a huge step backwards for public health in Arkansas.

Sen. Bond has introduced SB 347, which would impose a special tax on e-cigarette or vapor products that is equal to the tobacco tax rate. He is quoted in the Democrat-Gazette saying, “I think it makes a lot of sense to treat these nicotine delivery systems just as we do other tobacco products. It’s an epidemic out there.”

This is very flawed logic.

Vaping products and e-cigarettes are not tobacco products. Tobacco contains cancer-causing agents. States tax these products under the rationale that they impose a cost on society, so users should pay a special tax to mitigate that cost. That rationale is usually taken too far, but it does make some sense.

E-cigarettes and vaping products do not have the same health risks as tobacco products. In fact, many smokers use them to quit using tobacco products, a step that improves their health. Scott Drenkard of the Tax Foundation lays out the evidence:

Vapor products are generally found to have far fewer harmful chemicals in their composition. Two recent major literature review studies assess concerns about the risk profile of vapor products. The first, published in 2011, is by Zachary Cahn, a professor in the Department of Political Science at UC Berkeley, and Dr. Michael Siegel, a professor at the Boston University School of Public Health.

Their central finding is that “electronic cigarettes show tremendous promise in the fight against tobacco-related morbidity and mortality. By dramatically expanding the potential for harm reduction strategies to achieve substantial health gains, they may fundamentally alter the tobacco harm reduction debate.”

Taxing these products at the same rate as tobacco products will increase their costs substantially. To the extent that tobacco users switch to vaping as a way to save money, this tax increase will reduce those numbers. Thus it will likely cause more people to continue using tobacco, which by any measure is far unhealthier than vaping.

Sen. Bond may be concerned about an “epidemic” of people using e-cigarettes and vaping. But his bill encourages the continuation of the epidemic of lung cancer that cigarette use causes. That seems like a pretty bad outcome if you ask me.