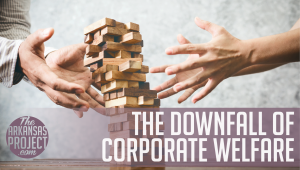 I am a regular reader of Max Brantley’s musings on Arkansas Blog at the Arkansas Times. As you may assume, I don’t often agree with the political slant of what is written there, but that’s OK – everyone should expose themselves to media sources outside of their bubble. But there is one issue where I find myself nodding in agreement when I read Max Brantley – corporate welfare.

There are a lot of problems arising from government granting special favors to businesses. Brantley provides a great service to his readers by pointing them out. The latest example of the folly of corporate giveaways comes from Jonesboro. Brantley explains the situation:

The decline was linked in part to a tax incentive granted to a major local industry, a Frito-Lay plant. It added 110 jobs in 2015 with a $45.7 million expansion. It thus qualified for refunds on sales taxes paid during construction. The city financial officer told the Sun Frito-Lay got a $160,000 refund recently for taxes paid in 2016 and 2017. He hastened to add that the new jobs were a net benefit to the city. Mayor Harold Perrin also was quoted as saying the city was suffering from the migration of retail business to on-line and some $118,000 in lost taxes on such sales.

In his conclusion, Brantley writes, “It’s worth remembering that there’s no free lunch on corporate welfare handouts of industrial expansions. The balance sheets don’t often bear out the premise that they trickle down into greater prosperity and greater support for government services.”
He is exactly right. Here is how Jacob Bundrick of the Arkansas Center for Research in Economics explains the “trickle down” consequences of these giveaways:

By nature, subsidies shift public money away from public goods. This shift of resources creates one of two outcomes. First, without increasing tax revenue, the city, county, or state issuing the subsidy decreases the amount of public goods in its jurisdiction. With less money to allocate to public goods, there will likely be a drop in the quality or quantity of infrastructure, a less developed workforce due to reductions in education, and a decrease in the quality or quantity of public goods like roads, education, parks, and bike paths that improve quality of life. The second possibility is that the government, wishing to maintain the current level of public goods, raises taxes.

Targeted tax breaks have a similar effect. Tax incentives likely lead to increases in marginal tax rates for those who do not receive tax incentives. When the government provides tax incentives to certain companies, it narrows the tax base and lowers the state’s revenue. To make up for the lost revenue, all other taxpayers must pay more. Otherwise, the government must reduce spending on public goods.

When governments grant incentives or tax breaks, this is an implicit indication that their tax policies must be flawed. After all, why would they need to offer a tax break to businesses if their taxes were not a barrier to business?
Instead of offering targeted tax incentives to certain businesses that have political connections or good lobbyists, elected officials should reform the tax burden so that all businesses benefit. The tax code should not play favorites. When politicians engineer it to do so, some business owners win, but taxpayers and the users of government services lose.

The issue of corporate welfare is one where it shouldn’t matter if you are liberal, conservative, or libertarian. The downsides should be evident to everyone, whether they are readers of The Arkansas Project or the Arkansas Times.