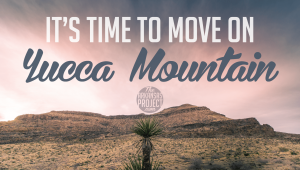 Where should the waste from Arkansas Nuclear One (and every other nuclear power plant across the U.S.) be deposited? That question has been debated in Washington, D.C., since the early 1980s. Thanks to political obstruction, it has not been settled yet. A recent House of Representatives vote, however, may signal that politicians are finally ready to allow a permanent nuclear waste repository in Yucca Mountain, Nevada, to open.

Nuclear power has a big role to play in our nation’s energy portfolio. Arkansas gets 22% of its electricity from nuclear power. While nuclear power has many environmental advantages, such as carbon-free energy, it does produce radioactive waste. That waste needs to be stored somewhere. It makes sense for this waste to go to one permanent repository instead of being stored in small dumps scattered around the nation.

Since the 1950s, nuclear power has been generating electricity in the U.S. The spent fuel from these plants has been placed in temporary storage areas since that time, generally near the nuclear power plant. In 1987, Congress passed a law designating the Yucca Mountain facility in Nevada as the nation’s permanent storage facility for nuclear waste.
A recent Democrat-Gazette editorial explained why Yucca Mountain is the right place to store the nation’s nuclear waste:

Yucca Mountain doesn’t have any rivers flowing through it to take radioactive waste downstream. Its water table lies 2,000 feet below the mountain’s top and 1,000 feet below where the waste would be stored. It’s in the middle of a basin in a desert where few people live, and its Death Valley hydrologic basin is quite different, and separate, from the Las Vegas aquifer. The mountain sits on the western edge of the Nevada Test Site, where close to 1,000 atomic weapons were detonated during the fissionable 1950s. The government already owns the land. More than $10 billion has been sunk into the plan, which basically made the innards of the mountain one big steel can.

And yet, as the editorial points out, all the logical reasons why Yucca Mountain should already be used to store nuclear waste were not enough to overcome the determined opposition of Nevada Senator Harry Reid. Senator Reid held a lot of sway during his time in the Senate thanks to his leadership positions in the Democratic caucus. He was determined that Yucca Mountain would not open, and he was successful in halting it during his time in office.

Senator Reid is no longer a senator. Congressional obstruction to Yucca Mountain may soon be over. The House of Representatives recently passed legislation that would allow the process for opening Yucca Mountain to restart. All of the members of the Arkansas House delegation supported this bill. It remains to be seen if there are enough senators to stop its passage in the Senate. With the retirement of Harry Reid, however, the upper chamber is not as daunting for Yucca Mountain supporters as it once was.

Political obstruction should not hinder nuclear power, which has been what has been happening with Yucca Mountain (on the other hand, political favoritism should not favor nuclear power, which has been happening in states like Illinois and New Jersey that are providing subsidies to the nuclear industry). It would be nice if the political debate over Yucca Mountain finally comes to an end this year after over three decades of dispute.