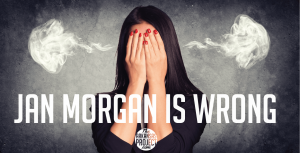 Even though she lost the recent gubernatorial primary to Asa Hutchinson in a landslide, it appears that Jan Morgan will continue to grace Arkansas residents with her thoughts on public policy. It’s always good when people are engaged in the debate over state policy. If Morgan wants to play this role, however, she needs to get her facts straight. I might even go so far as to say she needs to stop being dishonest.

Here is her post-primary opinion on tax reform, an issue she continually raised during the campaign:

Let’s unpack everything that is wrong here:
This is not Asa Hutchinson’s tax reform commission. The task force reports to the legislature. It is headed by a legislator. The governor does not control it. Even its name – The Arkansas Tax Reform and Relief Legislative Task Force — makes this clear
The task force cannot “tax churches,” any more than it can tax anything else in the state. The task force will simply recommend changes to the tax code. Ultimately, legislators and the governor will determine what those changes will be.

The goal of the task force is not to “get more money out of the people.” Instead, it is looking for ways to close some of the loopholes and other inequities in the tax code to find revenue that will pay for an income tax cut. Revenue-neutral tax reform that will make the code fairer and more pro-growth is a good thing.

Morgan claims that the task force’s action may result in ending the sales tax exemption for groceries, but. Gov. Hutchinson has already said he opposes this idea.

Contrary to Morgan, this is not a proposal to end the tax exempt status of churches. No one is talking about making churches pay taxes the same way that a for-profit business does. The proposal at issue is about removing the state tax exemption for passive income earned by a church. Merely because a church has tax exemption does not mean that all income earned by a church is exempt from taxes. Federal law, for instance, allows the taxation of rental income under certain circumstances. As the task force’s summary of this proposal explains, a variety of states do not have the same exemption that exists in Arkansas. This policy may or may not be a good one, but it would certainly not be unprecedented. And it is not the wholescale attack on churches that Morgan clearly wants her readers to believe.

Let’s put aside the policy in question that Morgan clearly does not understand. Let’s just consider that she probably willfully misrepresented what the task force is doing. She received her information from a Family Council blog post written by Jerry Cox on May 23. On the Family Council blog on May 24, Cox wrote this in a follow-up post: “Sen.

Jim Hendren (R — Gravette) is the senate chairman of the task force. I spoke with Sen. Hendren this morning, and he has assured me the task force has no interest in eliminating churches’ passive income tax exemption.” Then, at 10:43 p.m. that night, Morgan writes the above on Facebook using the original Family Council post to scare her followers into thinking that Gov. Hutchinson wants to end the tax exempt status of churches. She fails to link to the newer post by the Family Council that clarifies that 1) a senator, not the governor, is heading this task force, and 2) the task force is not interested in ending this tax exemption. In other words, she was spreading information that was wildly misleading when she either knew better or should have known better.

Jan Morgan has been a consistent demagogue on the issue of tax reform. Throughout her campaign, she portrayed this task force’s work as a way to raise taxes on Arkansans instead of a way to rebalance the tax code and lower income tax rates. She focuses only on the parts of reform that may end special tax treatment for a certain group while ignoring the overall benefits that would result. That is an easy way to score political points, but these types of dishonest attacks make good public policy more difficult. By doing this, she is standing in the way of lower overall tax rates. In effect, she is supporting keeping the tax burden high for Arkansas residents. The only benefit that comes from her actions is to gain attention for her.

One would hope that Morgan would have ended this type of cheap political grandstanding once the voters overwhelmingly rejected her. Unfortunately, she is continuing to spew rhetoric that veers close to dishonesty, perhaps even crossing that line. That may help keep her name in the news, ensuring that her public profile remains prominent, but it does little to help the residents of Arkansas.

A hat tip to Nate Bell for bringing this to my attention via his Twitter page.