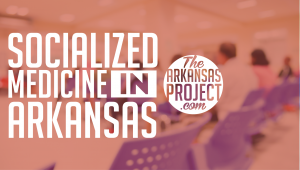 There’s a race to the left in the Democratic Second Congressional District primary. Among other things, three of the candidates are supporting what they call “Medicare for All.” This may sound nice (Medicare is a popular program, after all), but it is nothing more than advocacy for a single-payer system. More accurately, these plans should be called what they used to be named — socialized medicine (a term that has gone out of favor for some reason).

According to one of the candidates, Gwen Combs, “I would like to see a situation where people who pay taxes can go to the doctor without paying any more out of pocket than they’ve already paid in their taxes.” Her opponents Paul Spencer and Jonathan Dunkley supports Sen.

It’s interesting that Combs brings up the tax issue. The health care system envisioned by her would be extremely expensive. To be fair, the current health care system is also very costly. There is no reason to think that the government running all health care would do anything to control costs, however.

According to a report by the Heritage Foundation, independent analysts have examined the bill put forward by Senator Sanders. Get ready to pay a lot more in taxes if it is enacted:

The costs and the taxes to sustain it are doubtless going to be very large. For perspective, consider that the federal government spent a total of $3.9 trillion in 2016. According to the Urban Institute estimates, Senator Sanders’ government health plan would require a stunning $3.2 trillion in spending annually, while Professor Thorpe’s analysis indicates that the yearly cost of the program would amount to $2.6 trillion.

This report also points out quite a few other problems with “Medicare for All”:

For some people, these aspects of single-payer health care are a selling point. They think that everyone in the U.S., regardless of immigration status, should have access to the same health care as anyone else. They may also think that abortions are an essential reproductive service that should be paid for by taxpayer dollars. I’m not sure either of these positions are the views of voters in the Arkansas Second Congressional District, however.

Perhaps someone should ask Combs, Dunkley, Spencer, and any other candidates in the state supporting “Medicare for All” what they think about these issues. This idea may sound good in theory and it may have a catchy slogan. However, a nice-sounding bill title does not good policy make. Health care policy is complex, and those supporting a drastic overhaul of our system should be able to discuss their views in detail. Once they do, it will be interesting to see how they address some of the glaring problems with the single-payer scheme put forth by Senator Sanders or other socialized medicine plans.