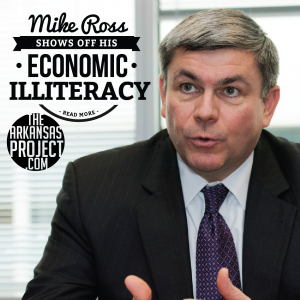 Mike Ross unveiled a “Fair Pay & Equal Opportunity Plan” Friday that he said was meant to correct disparities in pay between men and women.
The plan would protect employees from retaliation for discussing wages with their co-workers and when they raise concerns about gender pay discrimination.
It would “help employers with equal pay practices” and recognize those that excel in that area. It would also work with public and private entities to train women and girls on salary negotiations and recognizing pay disparities.
An annual report on pay inequity in Arkansas would be published with recommendations for closing that disparity.
Standing before a sign proclaiming Arkansas the “land of equal opportunity,” the Democratic candidate for governor said, “I want my daughter and yours to have the same opportunities to succeed as our son.”
Arkansas employers are already subject to a state equal pay law. Ross’ campaign said more needs to be done. He cited statistics from the National Women’s Law Center ranking Arkansas 35th in terms of equal pay for equal work, with women earning 77 percent of what men earn.

Here’s a problem with Ross’s statistic: it’s bogus. The notion that women are only earning ¾ of what men make, when they’re both doing equal work, is utterly groundless: Ross’s use of phony statistics is an embarrassment.
The problem with Ross’s statistic is that it only measures the full-time earnings of men compared to women. It doesn’t control for things like hours worked, education level, and industry.
For instance, Ross’s statistic that “women earn 77 cents for every dollar men make” weights the earnings of a female first year school teacher and a male attorney who is partner of his firm equally. Obviously, the male attorney will earn more than the first-year female teacher, but to say this is the result of gender discrimination ignores factors like experience, education and industry type.
To reiterate: it’s a bogus statistic!
As Genevieve Wood recently noted:

The wage gap between men and women is now almost non-existent. Saying over and over, as the Left is prone to do, that “women make 77 cents for every dollar men make,” doesn’t make it true. When you compare men and women in similar jobs, with similar experience, education, years in the workforce and hours worked, the wage gap all but disappears.
This is especially true for the millennial generation. According to 2008 Census data, women in their 20s, living in metropolitan areas, who don’t have children, earned 8% more on average than their male counterparts.
And who increasingly controls money in America? Recent studies and census data show women control over 50% of private wealth in the U.S. and about 80% of household spending decisions. Over 40% of the 3 million Americans making over $500,000 a year are women.

However, if Ross does end up getting elected and putting his plan into place, one employer he might start helping with “equal pay practices” is the Democratic Party of Arkansas (DPA). In July, The Arkansas Project exclusively reported that the DPA’s male press secretary makes 73 percent more than their female communications director. Awkward.
Apparently, Ross also wants state government to “help employers with equal pay practices.” Gee, this is help that I bet business owners will be thrilled to receive. “Hello, Business Executive, I’m with the Governor’s Office. I’d like to schedule an appointment to help you better run your own workplace.” Surely the DPA will be the first business that a Ross Administration would target.