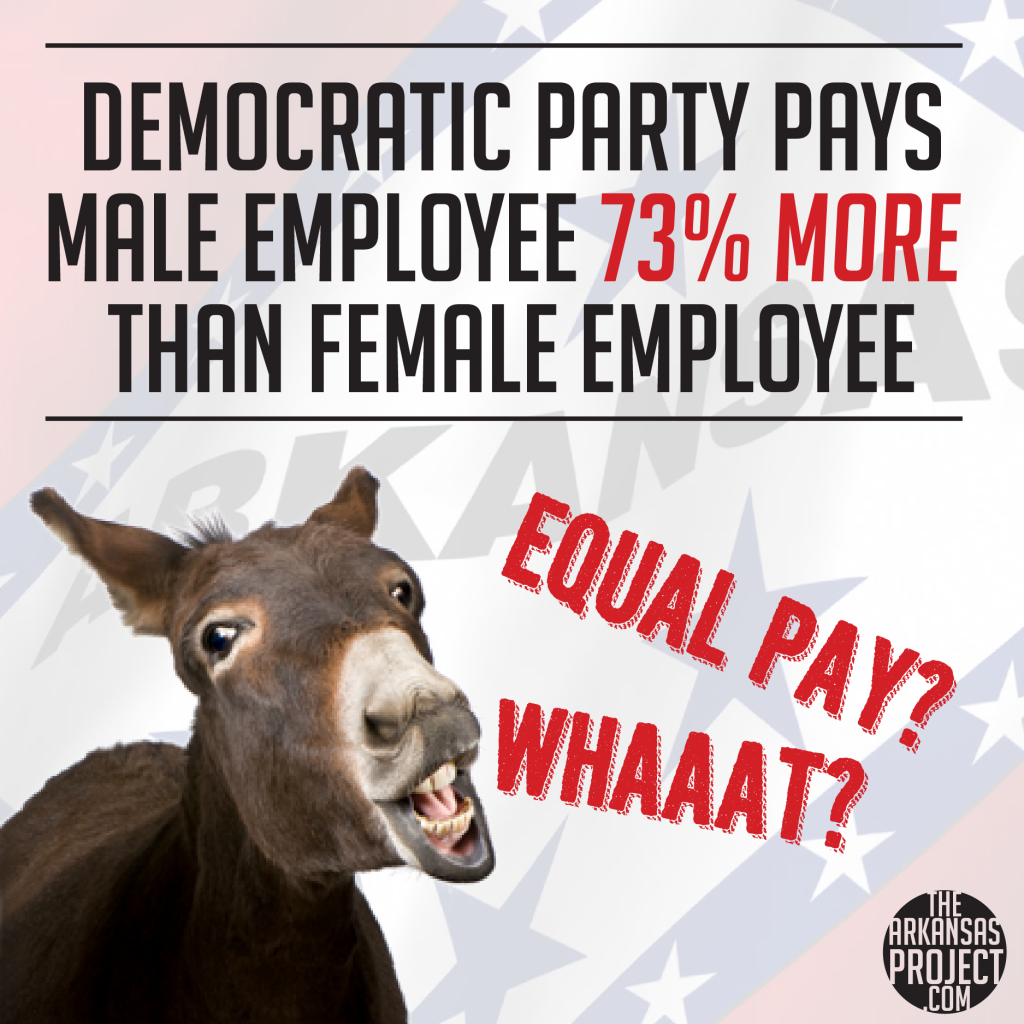 Taking a page from President Obama’s playbook, the Democratic Party of Arkansas has made it clear that they’re interested in causing a stink about “equal pay” this election cycle. In January, DPA executive director Candace Martin wrote a letter blasting Congressman Tom Cotton and Senator Rand Paul just before Paul visited Arkansas. According to Martin, “Arkansans are fair minded people. When a woman is paid less than a man for doing the exact same job, it’s just not right.”
An authorless post on the DPA’s website in April said, “Equal pay for equal work is about basic fairness.” And just last week, the DPA’s Lizzy Price sent out an email saying:

Paycheck fairness will ensure that women make the same as men for doing the same job, which is why Mark Pryor and Mike Ross voted for the Lilly Ledbetter Fair Pay Act in Congress. Tom Cotton voted against equal pay for equal work.

But Martin’s and Price’s concerns about paycheck fairness appear selective: for some reason, they’ve overlooked the out-of-control wage discrimination in their own workplace.
According to the DPA’s monthly financial reports (made available by the FEC), our friend Patrick Burgwinkle, the DPA’s male “press secretary,” makes roughly $2,600 per pay period. But Lizzy Price, the DPA’s “communications director” — a job that presumably requires similar skills and experience as “press secretary” — makes just $1,500 per pay period. Burgwinkle’s paycheck is 73% bigger than Price’s.
And the fun doesn’t stop there: Burgwinkle also makes more than Candace Martin, the executive director. In terms of bureaucratic rank, the executive-director position should be a step above a communications position; you’d think it would pay more. But not at the DPA. Those misogynists over there apparently pay lower-ranking employees more than their superiors, as long as they’re men. What other conclusion could one draw, except that the DPA hates women?
(Burgwinkle, by the way, has confirmed to The Arkansas Project that “Patrick Burgwinkle” is his real name.)
Democratic hypocrisy on equal pay isn’t unique to the DPA either: in April, the Free Beacon reported that Arkansas’s U.S. Senator Mark Pryor pays men on his staff $5,800 more than women.
I reached out to Burgwinkle for comment. As of press time, I have not heard back from him. But perhaps that’s not a huge surprise — what could he possibly say that wouldn’t undercut the DPA’s entire “equal pay” narrative?
Maybe Burgwinkle would contend that he earns more because he has more work experience or more skills. Or maybe it’s that Burgwinkle works so much harder than his female counterpart that he deserves to make 73% more than she does. If he said that, it would be tough for me to criticize his response. Because it’s not my job, your job, or the government’s job to dictate what a day’s work is worth to two mutually consenting parties in a free market. Maybe the DPA now agrees; or maybe they’re just interested in scoring cheap political points.
As for where Congressman Cotton stands on the “Paycheck Fairness Act,” Cotton campaign spokesman David Ray passed along this statement:

Washington politicians love to wrap their ideas in innocent-sounding names (just as they named Obamacare the “Affordable Care Act”), and while discrimination is abhorrent, this legislation would have plenty of negative consequences. This law ends up hurting the very people it claims to help by encouraging personal injury lawyers to file frivolous lawsuits in order to win legal fees, not to promote equality.

More on the costs and benefits of “paycheck fairness” in the coming days. For now, I feel obligated to say that if Arkansas Democrats are truly interested in promoting equal pay, the least they could do is lead by example.