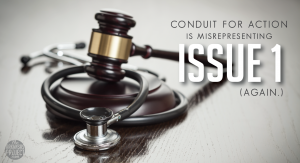 There has been a lot of confusion and misinformation surrounding Issue 1. The lawyer lobby is doing all it can to spread bogus horror stories and mislead voters about the consequences of lawsuit reform. But at least lawyers usually get the basic facts about Issue 1 right. Regrettably, some Issue 1 opponents don’t even meet the minimal level of accuracy met by Arkansas trial lawyers. Sadly, Conduit for Action falls in this category.

We’ve highlighted numerous times in the past that Conduit for Action has demonstrated little or no concern for facts and fairness when discussing lawsuit reform. Consider this claim on Conduit for Action’s blog regarding Issue 1:

Supporters of ISSUE #1 are technically correct when they say it “gives you the right” to waive a jury trial in a civil case. But opponents of ISSUE #1 are correct as to the practical effect being a loss of your right to jury trial.

I wonder which (mysteriously unnamed) supporters of Issue 1 are saying that it gives anyone the right to waive a jury trial in a civil case. If these nameless supporters exist, then they are wrong. Issue 1 does not affect anyone’s right to pursue arbitration. Indeed, Issue 1 doesn’t deal with arbitration at all. It is a mystery to me how Conduit for Action might find anything in the text of Issue 1 that makes arbitration any more likely.

Currently, some businesses can already ask you to sign a form that allows for arbitration in the case of a dispute. Issue 1 would not change that at all. It is very strange that a self-described conservative organization would get so upset about the ability of someone to contract for arbitration. Here’s Conduit’s characteristically overheated rhetoric about Issue 1, starting with their prediction of doom:

Anyone who is committed to reading and understanding Issue 1 (a category that apparently excludes our friends at Conduit) knows that this proposed constitutional amendment expressly preserves the right to a jury trial. (If you weren’t aware of this, take a look at Section 3 of Issue 1.) Of course, I have to wonder if Conduit for Action really believes its argument that Issue 1 opens the door to arbitration. That is because a mere five days after explaining the extraordinary danger of letting customers make choices about arbitration agreements, it then leveled a contradictory charge against Issue 1: “Issue 1 limits the ability of both clients and attorneys to have freedom to contract.”

What animating principle is driving Conduit for Action here? It doesn’t seem to be any concern about freedom of contract. Instead, it seems that Conduit for Action has decided to oppose Issue 1, then it has made up reasons to support that conclusion (literally fabricating the charge regarding arbitration).

This is further illustrated by its statement that “CFA supports loser pay tort reform but opposes Issue 1 as there is no loser pay tort reform language included,” while simultaneously attacking Issue 1 because it “would allow the legislature to take over the rulemaking authority of the judicial branch.” As we’ve pointed out elsewhere, no reform such as loser pays can be legislatively enacted unless the legislature has authority to set rules of judicial procedure. Saying that one supports loser pays but opposing the mechanism necessary to make that happen demonstrates either a lack of understanding of legal issues or a lack of sincerity. The posture is similar to a used car salesman who offers to sell you a nice car at a great price but then insists that providing you with the car key wasn’t part of the deal.

It’s sad to see a self-proclaimed conservative organization rejecting a conservative idea like lawsuit reform. It’s even sadder to see it do so through fabrications and obviously unserious arguments. But Conduit for Action’s breathless, desperate, and self-contradictory advocacy against Issue 1 suggests that whatever is motivating the organization, it has nothing to do with conservative values or matters of principle.