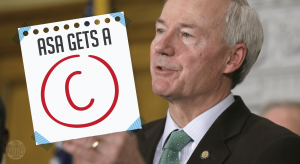 When it comes to taxing and spending policy, Governor Asa Hutchinson is squarely in the middle of the pack.

At least that’s what Chris Edwards of the Cato Institute concludes. He recently wrote the 2018 “Fiscal Policy Report Card on America’s Governors.” In it, he assessed governors using this criteria:

Governor Hutchinson received a C, indicating that while he was not among the worst governors in terms of taxes and spending, he could have done better. Here is how Edwards assessed Gov. Huchinson’s actions:

Former U.S. congressman and federal official Asa Hutchinson entered the Arkansas governor’s office in 2015. Hutchinson campaigned on a middle-class tax cut, which he delivered soon after taking office. He signed into law reduced tax rates for households with annual incomes of less than $75,000, which has saved them about $90 million a year. As the governor said, “Arkansas has been an island of high taxation for too long, and I’m pleased that we are doing something about that.”

In 2017, Hutchinson approved a further $50 million in tax cuts, primarily for moderate-income individuals. And in 2018, as a task force was considering major tax reform, Hutchinson proposed cutting the top individual income tax rate from 6.9 percent to 6.0 percent. He would offset the lost revenue with budget surpluses and the closure of narrow tax breaks.

Tax policy appears headed in the right direction. Depending on what the tax reform task force recommends, and then on what the legislature ultimately passes, it is possible that Gov. Hutchinson’s grade could improve next year. Of course, reducing spending would help, too.

Arkansans should not be displeased with the governor’s C grade, but everyone will benefit if he can find a way to become an A+ governor on taxes and spending.