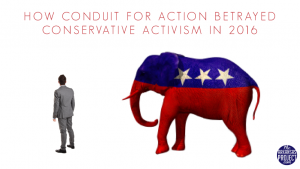 As discussed in a previous blog post, Conduit for Action seems to have made a second career of chastising others for being insufficiently committed to the Republican platform. Conduit has set itself up as the arbiter of GOP orthodoxy. However, as we pointed out, that claim is hollow,  because Conduit has made its opposition clear to a key part of the GOP platform – tort reform.

Conduit will surely deny this charge. After all, its website proclaims its support of tort reform. But giving lip service to a principle is different from actually supporting that principle in practice. When there have been serious efforts in the legislature or at the ballot box to enact tort reform, Conduit for Action has been eager to find excuse to oppose them.

For example, take the organization’s review of the 2016 ballot initiatives, one of which (Issue 4) was a tort reform measure, Issue 4. Conduit came out strongly against Issue 4.

(Notably, Dan Greenberg (who was then the editor of the Arkansas Project) told me that, as soon as he noticed Conduit’s error, he sent a text to Joe Maynard and Brenda Vassaur-Taylor, Conduit’s leaders, pointing out the factual mistake. Vassaur-Taylor texted him back, saying that she would call him back the next day and correct the error. But she never called him back, and she never fixed the error.)

Ultimately, the Supreme Court yanked Issue 4 off the ballot before it was voted on. The Court found that the use of one word in the initiative — “non-economic” — could be confusing to voters, and therefore that the people shouldn’t be allowed to vote on it. I doubt that I am the only person who thought that the Court’s justification for removing Issue 4 from the ballot was more than a little specious.

If you look closely at Conduit’s claims against Issue 4, you can see a desperate quality about them. Conduit regularly makes hyperbolic claims about tort reform that crumble and dissolve under the slightest examination. To my eye, it seems as if they are looking for any excuse to oppose a solid reform proposal, so as to keep the appearance of adhering to conservative values.

In reality, Conduit has an extensive history of fighting tort reform: Conduit’s objection to Issue 4 is far from an isolated instance of this organization turning its back on tort reform. In future blog posts, I’ll discuss the organization’s other efforts to sabotage tort reform while trying to hide its agenda by supporting sham tort reform efforts.

I should add that I attempted to contact Conduit to understand their perspective about this story. They replied back by email, to insist that the questions I had for them needed to be in written form. I dutifully sent emailed them some written questions. As yet, they have not answered them.