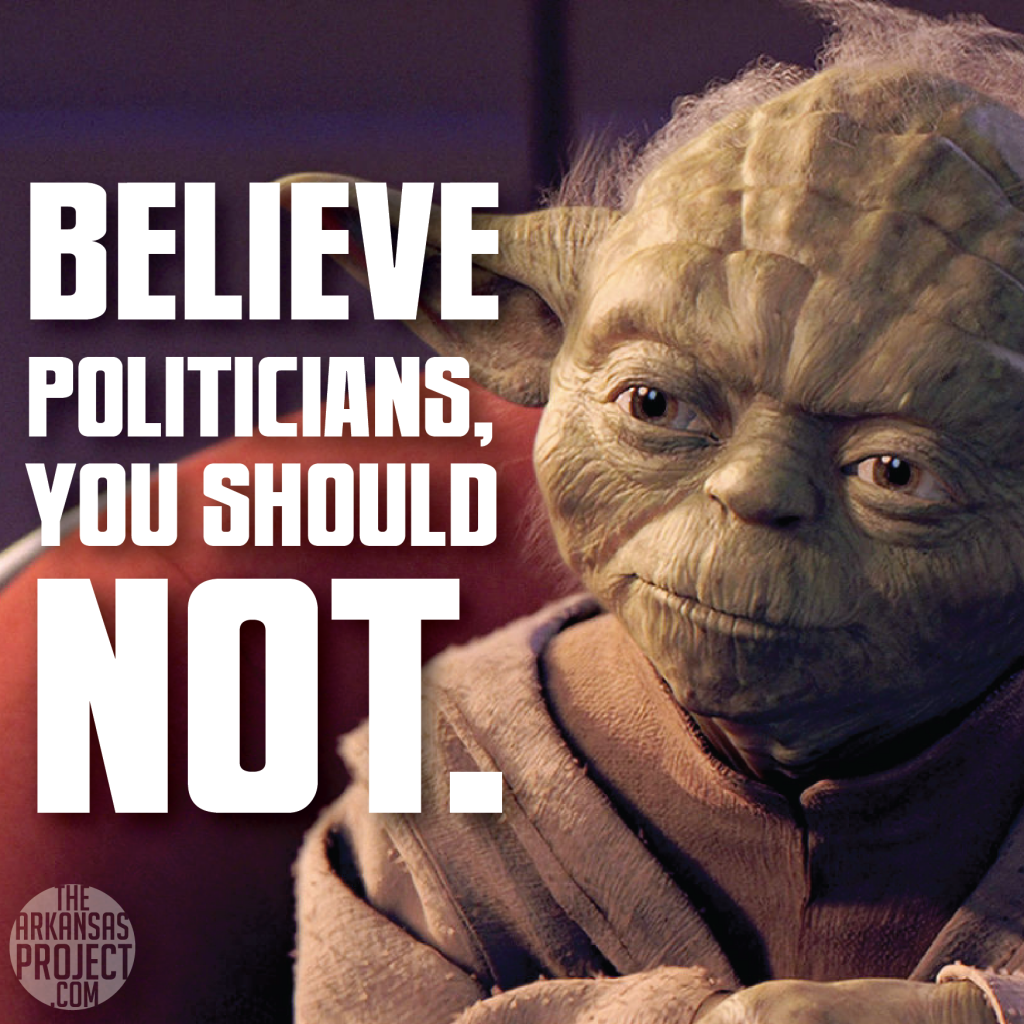 On Tuesday, Arkansas Obamacare supporters rolled out a set of changes to the state’s newest entitlement program, misnamed the “private” option. According to proponents, these changes will increase “personal responsibility.” But a closer look reveals that state decision-makers are trying to reduce the amount of “skin in the game” for Medicaid expansion enrollees, shifting even more of the financial burden onto taxpayers.
In order to create “personal investment” in the free health plans, Arkansas will ask the federal government for permission to do the following (which is weird because we’ve been repeatedly told that the PO gives Arkansas “control” over our healthcare system):

If the contributions are made, that’s it — there are no other out-of-pocket expenditures required for enrollees. Taxpayers will pick up the rest of the co-pays, deductibles, premiums, etc. But that’s not all: when the enrollees make their monthly contribution, the taxpayers will chip in a $15 contribution as well. Based on the projected number of enrollees from 50-138% FPL, this could end up costing taxpayers an additional $30 million per year.
If enrollees fail to make their monthly contributions, for those below the poverty line, the claim will be passed off to a third party for collections — but taxpayers will still pay for this enrollee to receive care, and taxpayers will still cover all of their cost-sharing.
For those above the poverty line, if they fail to make their contributions, they will be billed by the provider and can be denied care, but, for a myriad of reasons, I think it’s unlikely that this will actually happen. What is critical to note here is, even if enrollees never make their monthly contributions, they will not be removed from the program.
What happens with the funds that are put into the HIAs? The contributions are capped at $200, but here’s the catch: none of these funds are used for medical care. Instead, the money sits there and receives (in many cases) a generous 3-for-1 match, funded by hard-working folks like you, the taxpayers.
If an enrollee ever leaves the “private” option, they get to take the $200 with them and use it towards other health insurance (I wish I could get this deal). To state the obvious, the idea that any of this encourages “personal responsibility” is just ridiculous. Here are just a few of the ways taxpayers are getting a raw deal:
1. These accounts are far from what we’ve been promised.
Advocates of the Obamacare PO have long declared their adoration for health savings accounts and promised along the way that HSAs and true “personal responsibility” would be a key feature of the program (at some undetermined point in the future). Just last month, Senator David Sanders, the father of this Arkansas-Obamacare disaster, penned an op-ed in a Utah newspaper. In that letter, Sanders said:

In year two, those individuals who fall between 50 to 100 percent of federal poverty line will be required to pay co-pays.

Of course the idea that nominal co-pays would have a large impact on controlling costs is silly to begin with, but Sanders’s declaration about the HIAs is simply untrue — or, as he might say, “patently false.” In reality, as previously mentioned, those from 50-100 percent won’t pay any co-pays at all under these “Health Independence Accounts.” Instead, they’ll pay a $5 contribution and have all of their co-pays covered by taxpayers. I have to wonder why Sanders would make this claim just a few short weeks ago, only to be proven so completely wrong so quickly.
I contacted Sen. Sanders yesterday morning for his comments on the HIAs, hoping to learn exactly how they encourage any “personal responsibility” at all. Mysteriously, I have not heard back from him. Likewise, Sen. Missy Irvin also failed to return a call; in the past, she’s conditioned her PO support on the implementation of health savings accounts and, as of now, I have no idea whether she’ll find the boondoggle that DHS just unveiled satisfactory.
2. The HIAs will actually reduce the amount of cost-sharing / “skin in the game” for Medicaid expansion enrollees above the poverty line, moving “personal responsibility” significantly backwards.
Currently, enrollees from 100-138% of federal poverty are subject to a maximum of $604 in cost-sharing. Under the HIAs, enrollees can pay $10-25 per month (depending on their income) and forgo all other cost-sharing requirements, meaning the maximum amount of cost-sharing for this group will be $120-300. This change will absolutely result in significantly less “skin in the game” than this group has had thus far. Are taxpayers really expected to believe that this is moving our state towards more “personal responsibility?”
3. “Private” option enrollees below the poverty line (and above 50% FPL) will pay a microscopic fraction of the cost-sharing that even traditional Medicaid allows.
Rep. John Burris, another outspoken advocate of the Arkansas-Obamacare expansion, said during the original debate over the adoption of the plan:

You have so much more flexibility and cost-sharing in that Private Option exchange than you do under Medicaid.

This claim was certainly not true for those under the poverty line for Year 1 of the PO — they had absolutely no cost-sharing at all. But for next year, if the HIAs are approved, this will not be true for any of the “private” option enrollees: there will be no co-pays in the “private” option for those who make their monthly contributions.
(Based on the latest available data, more than 80% of enrollees are below the poverty line and had absolutely no cost sharing this year.)
Traditional Medicaid rules allow for cost-sharing of up to 5% of income. Based on that percentage, someone  making 99.9% of FPL previously could have faced cost-sharing of roughly $613 per year. Under the HIAs, however, this individual will only be required to pay $5 per month or $60 per year. So, despite the promises of “skin in the game,” these beneficiaries will pay less than 10% of the burden that they might share under traditional Medicaid rules.
Similarly, someone near the upper income limit for private-option eligibility could’ve faced cost-sharing of over $800 in old Medicaid. Now, their cost-sharing will be limited to just $300. And finally, those in the PO who are below 50% of the poverty level will continue in the program with no out-of-pocket expenses whatsoever.
What happened to all that “personal responsibility?” These enrollees would have more “skin in the game” in old Medicaid than they will in the “new and improved” Medicaid that Arkansas politicians have created.
4. The only “incentives” in the HIAs are bad ones.
In his Utah op-ed, Sen. Sanders also said:

Year two will also see the introduction of health saving accounts — Independence Accounts — injecting consumerism into the Private Option by incentivizing the newly covered to make wise choices about their health care spending.

This, too, is just wrong. Because there is no connection between the funds in the HIA accounts and the trips an enrollee makes to the doctor, there is no incentive for enrollees to make “wise choices” at all. In fact, there is a (bad) incentive for enrollees to stay in the plans longer (at least 6 months) in order to get free money from taxpayers and go to the doctor as much as they want, without any financial consequences. A more appropriate name for these new accounts would be “Government Dependence Accounts.”
It would be generous to say this entire saga reminds me of a really bad (and really expensive) Saturday Night Live skit. The advocates of this disastrous Obamacare program still seem to think that if they continue to throw out as much private-sector, management-consultant lingo as humanly possible, somehow the program will be a success. “Competition! Free markets! Cost-sharing!” But unless this lingo actually evolves into tangible policy outcomes, it’s simply an extravagant word game that’s being played to give politicians cover for the health care disaster they’ve brought to our state. It’s just governing by buzzwords.
The lack of actual personal responsibility in these HIAs is simply the latest in a long string of empty promises from “private” option architects. Much of this is the result of the legislature abdicating their responsibility to craft policy and dumping it off on state bureaucrats by statutorily instructing them to “develop” these accounts. DHS could announce tomorrow that their new HIAs will also include a new Cadillac SUV for every PO enrollee, and that the gift of this new car will help promote “personal responsibility.” Maybe David Sanders would defend that, too. But ultimately, no matter how much politicians try to spin it, a “toy Yoda” isn’t a Toyota, free stuff will never encourage personal responsibility, and these “Health Independence Accounts” aren’t anything like actual health savings accounts — which is what we were promised. More on that tomorrow.