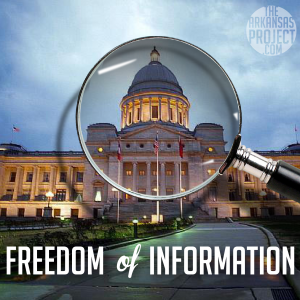 While Arkansas has a strong Freedom of Information Act (FOIA), government still has room to improve in its mission of actually following the law, according to one law professor.

We see a disconnect often between FOIA and what government agencies are doing. The FOIA actually has some significant strength. Arkansas’s FOIA is not a bad FOIA. That doesn’t mean it is not in need of improvement. It is, but it is actually a pretty good FOIA overall and yet we often see agencies simply denying requests and we are at a loss to understand how they can deny those requests.

FOIA guarantees citizens access to information about how their tax dollars are spent. For instance, if a private citizen is curious about the sick leave or vacation time of a state employee, FOIA permits a request to the proper governmental institution for that information.

Steinbuch also said at the meeting that one improvement to Arkansas’s FOIA would be to require government officials to cite a specific reason to the citizen when denying an open records request.
Steinbuch said:

One thing that we can simply do to improve the process for the public…is to require agencies, when refusing to turn over documents, to cite to the specific exemption that applies. That is not required currently under Arkansas law but is required under other FOIAs in other states.

One recent example Steinbuch gave of the “disconnect” between what the law says and government officials do was a run-in The Arkansas Project had back in January with the administration of the Bowen Law School that was based on our outrageous expectation that public meetings should actually be public.
Steinbuch said:

Under Arkansas’s FOIA, I believe it is quite clear that those meetings are public meetings. As it turns out, our constitution reinforces that point at the school to say the same thing. The Arkansas Project, the fine reporting institution that it is, sent a reporter to attend that meeting and he was allowed to attend that meeting. Then he wrote some comments (which were) highly informative, somewhat critical as the press tends to be and then thereafter was informed by the administration that those meetings are not public meetings under the FOIA. That assessment is not a sound assessment and they didn’t consult me as the only expert on the FOIA on the faculty. Putting that aside, we need to ensure that the public including the press continues to have access to public meetings.

No official action was taken at the meeting, but legislators also considered a draft of legislation from Rep. Jim Nickels that would require private companies who receive taxpayer funding for a contracted service to disclose the contract amount and the rate of pay for private employees under the contract to the public. AAI President Dan Greenberg also spoke, recommending FOIA advancements in the area of criminal records disclosure, affirmative-action disclosure, and a statutory right to observe and record what happens in public. We’ve written about these reforms on pp. 65-76 of our Action Plan for Arkansas.