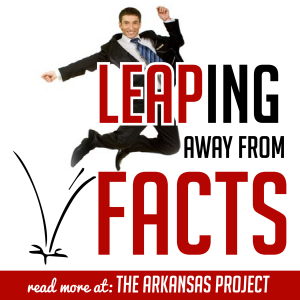 Our previous coverage of UALR-Bowen Law School’s affirmative action program, LEAP, revealed that the program admits marginally qualified students to the law school after they have been initially rejected. After we broke the news about the original program’s constitutionally questionable nature, the law school issued a statement entitled “LEAP – Your Questions Answered.” Unfortunately, the statement evades questions rather than answering them. The statement explains:

The [LEAP] program seeks to admit students historically underrepresented in law schools or who come from socially or economically disadvantaged backgrounds. The goal is to produce lawyers who wish to serve underserved communities throughout Arkansas.

When interviewed on television about LEAP,law school Dean Michael Schwartz went further, saying, “For example, there’s a real huge problem in the state in getting legal representation for anyone in the Delta region.” Furthermore, as we reported earlier, Schwartz argued that the program will get more lawyers in the Delta.
But oddly enough, as far as we can tell, not even one of the LEAP students comes from anywhere near the Delta. This means that there is no reason whatsoever to think that LEAP students would be any more likely than anyone else to set up a law practice there. Take it from the horse’s mouth, or at least the school’s Office of Communications. The O of C informed us that “Bowen has ten students enrolled in LEAP, but two of those students opted out of releasing directory information.” The eight students who revealed their hometowns include four from Little Rock, two from Maumelle, one from Rogers, and one from Allen, Texas.
(In fairness, maybe one or both of the two students who didn’t want to identify a home town comes from the Delta. In that case, we’d have to modify our conclusion: namely, an incredibly tiny fraction of admitted students might meet the criteria that this program was supposed to address.)
But seriously: Little Rock? Maumelle? Rogers? Allen, Texas? These are not exactly regions known for their dependence on the local rice and soybean crop. (Unless maybe they’re growing it in hydroponic tanks inside Walmart.) Allen, Texas is better known as the tony Dallas suburb with a $60 million high school football stadium that contains a three-tiered press box rising above the Texas horizon.
Although these areas have their share of difficulties, it had never occurred to me that the best way to solve their problems is with more attorneys. Indeed, Pulaski County (which comprises the hometowns of 75% of LEAP admittees) has the most attorneys per capita in the entire state, and Rogers — way up in the distinctly non-Deltaish northwest — is in one of several counties with the second highest population of lawyers. (See page 21 of this report.) How exactly are these LEAP participants considered “students historically underrepresented in law schools or who come from socially or economically disadvantaged backgrounds…who wish to serve underserved communities throughout Arkansas”?
Obviously there’s no reason to believe that LEAP “students historically underrepresented in law schools or who come from socially or economically disadvantaged backgrounds” are especially likely to become “lawyers who wish to serve underserved communities throughout Arkansas.”  This “goal” is not a serious statement of policy based on any sort of data; it’s just blind faith.
Indeed, even Elie Mystal of Above the Law (a self-described liberal who has disagreed with us in the past) is on our side here. In a post entitled “Law Dean Gives Worst Advice to Minorities Since Someone Told Native Americans to Have a Drink,” Mystal emphatically rejected Bowen’s argument for its affirmative action program when it was made by another higher-education bureaucrat — the Associate Dean at Penn State, Carla Pratt:

Pratt’s agenda is to get more lawyers for underserved clients — clients who generally can’t afford to pay a lot for legal services, or pay at all. How are these young black lawyers supposed to make a living and pay back their loans with “entrepreneurial” practices focusing on clients who can’t pay? It makes no sense. Pratt is making no freaking sense. She might as well be pointing to a Wookie at this point.

Perhaps, at some undetermined point in the future, the LEAP program will attract scores of enrollees from the Delta who will suddenly gain an interest in returning to their communities to work for little or no pay. In the meantime, it looks like LEAP amounts to little more than an ineffective program designed to appease the guilty consciences of white liberals.
And while we’re on the topic of LEAP, you’ve got to see this email that Bowen law professor John DiPippa sent his colleagues. It purports to be a response to our earlier piece on LEAP. Although animus isn’t a very good argument in the Supreme Court, it is apparently good enough at Bowen:

… I write this knowing full well that this email will be forwarded to Nic Horton.
His article is an example of the current “journalistic” practice of manufacturing a controversy where none exists. There is no gap between my words and the words of Deans Schwartz and Beiner.To assert otherwise is either ignorance or dishonesty. You see, Horton et al couldn’t write a story that reported the facts. Rather, because he seems to believe that liberals can’t be trusted, he must relentlessly expose their duplicity. Just spend some time listening to the Fox News rants that the ACA enrollment numbers are fake to see that frame in action.
In our case, however, this goes beyond partisan slant and seems personal. There was no breathless expose of UA’s adoption of a similar program. And his “publication” shows no interest in access to justice issues at other times, as far as I can tell. Yet when the Bowen School discusses an important program that can expand access to justice for people around the state, he leaps (pun intended) to the ready finding duplicity around every corner. Where did that sudden interest come from?
Horton was right about one thing. His article proves the value of the FOIA but not in the way he thinks. Rather, it shows that we were diligent professionals working hard to do the right thing legally and morally. That we disagree on some aspects of the program simply shows we have thoroughly vetted it.

Three observations come to mind:
1. If DiPippa is concerned about our coverage of the U of A, he should read our reports on the embarrassing professional-responsibility failures of the archivists up there.
2. When you send out an email to all of your colleagues that states “I write this knowing well that this email will be forwarded to Nic Horton,” you should consider that we might indeed conclude that what you’re saying is worthy of a broader audience. You might call this the briar patch effect.
3. If you can figure out how to reconcile the underlined text in the second paragraph with the underlined text in the fourth paragraph, you may be qualified to teach law at Bowen.